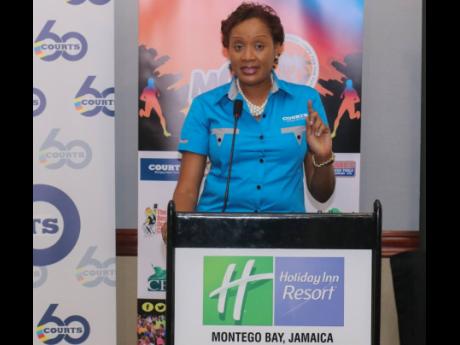 Courts Jamaica Limited is increasing its partnership with MoBay City Run, the western Jamaica-based charity, which has funded scholarships and education grants for scores of tertiary-level students, to the tune of $19.5 million over the past five years.

“We are pleased to join all the other organisations as we solidify our partnership with Montego Bay City Run to the tune of $2 million,” said Janet Sylvester, commercial director, Unicomer (Jamaica), which owns the Courts brand. “We were a partner from inception and will continue for a very long time.

“This year as Courts celebrates its 60th year, our partnership will see us sponsoring 60 persons in four communities to participate on race day, collaborating with the Montego Bay City Run committee to identify and support the feeding programme for two schools and on race day, creating a chill zone filled with activities for all the participants,” said Sylvester, who was speaking at the launch of the 2019 MoBay City Run at the Holiday Inn in Montego Bay last Friday.

The MoBay City Run, which is the brainchild of Montego Bay-based journalist Janet Silvera, is a charity road race which raises money to provide scholarships for tertiary-level students in western Jamaica who are having difficulty financing their education.

This year’s event, which will be held on May 5, will begin at the Old Hospital Park along the city’s scenic Jimmy Cliff Boulevard. It is scheduled to start at 6 a.m. and will include a 5K walk and run and a 10K run.

According to Sylvester, Courts’ partnership with the event is an extension of the company’s summer scholarship programme through which the organisation has invested more than $300 million towards high, tertiary and technical education. It has also facilitated summer jobs, mentorship by senior management, and this year, will include an internship at Unicomer for full-scholarship recipients.

“Education is a unique institution aimed at developing and multiplying human capital, forming a set of values and principles and socially important ideas that create the future of society as a whole,” noted Sylvester.

At the launch of the event, scholarship recipient Enrique Blagrove, commented on how he received assistance to study at the University of the West Indies Western Jamaica Campus.

“When I sent in my application for the scholarship for the MoBay City Run scholarship, I had very little faith. A few weeks into the first semester, I received the life-changing phone call that I got the scholarship,” said Blagrove.