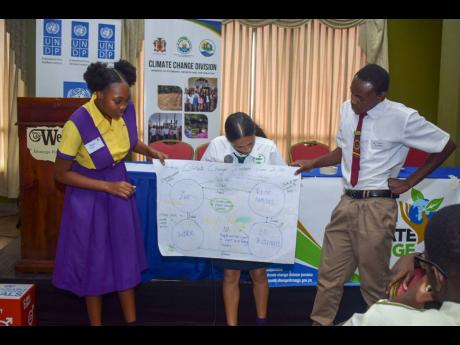 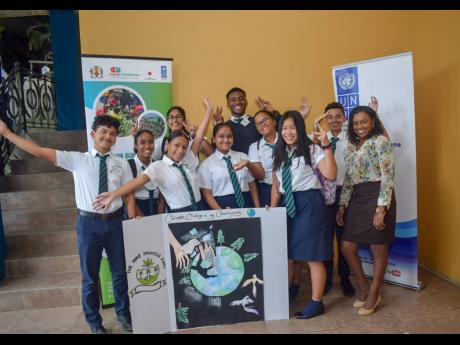 Kirk Myers
Students show off their poster on the theme ‘Climate change in my community’.
1
2

RURAL YOUTH who got in on the conversation about climate change and Jamaica at a conference staged in Montego Bay last Friday have lauded the event as an important first.

“For me, the conference was very informative on the whole climate change issue and the way Jamaica is going in that direction,” said Gabrielle Harris, a law student at the University of Technology (UTech) in the western resort city, who served as one of the facilitators.

“I think it was a very good thing that they did. We in the western region, we are not in Kingston, and so our voices don’t get to be heard (on these issues). It was a good experience for youths down here to be part of it and to have our voices heard,” she added.

Her sentiments were echoed by Jheanelle Artwell, herself a law student at UTech.

“It was awesome to see how the students on the whole were so receptive to what they were learning about. You could see how excited they were and eager to learn about climate change and what they could do to make the environment better, whether through the different changes that have been implemented, such as the recent plastic ban and the parrot fish ban,” she said.

“It is also important that they have this conference at this side of the country because normally these types of conferences are held in Kingston and people at this end of the island are not aware of what is happening. It was a very good move that it be held in Montego Bay to enable the students to be aware of what is happening in the environment and to look forward in assisting with the realisation of Vision 2030,” Artwell added.

Some 92 students from educational institutions across western Jamaica and 32 other participants, among them teachers, panellists and exhibitors, gathered at the Wexford Hotel for the event that looked, among other things, at “the simple science of climate change” as well as at “climate change innovation and entrepreneurship” and “youth-led climate actions”.

The event, hosted by the Climate Change Division (CCD) of the Ministry of Economic Growth and Job Creation with financing from the United Nations Development programme (UNDP), also gave participating youth the chance to showcase a variety of creative pieces.

The pieces, which included posters, poetry and songs, were created along the themes of ‘plastic ban’, ‘coral reefs and fisheries’, ‘the sustainable development goals’ and ‘Vision 2030 Jamaica’, in the context of a changing climate.

Ayesha Constable, one of the organisers, said she was well pleased with the results.

“Key outcomes included increased understanding of climate change and the importance of youth engagement; awareness of youth-led organisations and initiatives that they can get involved in to support climate action, and a commitment from schools to build on the work and lessons learned at the event,” she told The Gleaner.

“(There was also) greater awareness from students of the related activities in western Jamaica and greater integration of schools in that region, and students met and spoke with representatives from the Sandals Foundation, Vision 2030, Montego Bay Marine Park, the Japan Caribbean Climate Change Partnership, the United Nations Development Programme, and the Climate Change Division (CCD),” she added.

On next steps, Constable said there is to be a second event staged in eastern Jamaica to bring young people from that side of the island into the conversation.

“There was also a recommendation that the CCD, in partnership with the Ministry (of Economic Growth and Job Creation) and existing youth-led organisations to support the formation of climate change clubs in schools and/or build out the climate component of environmental clubs. Many of the students expressed interest in joining and partnering with the organisations represented by the young panellists to implement ideas for projects and actions,” she noted.