Eva Schloss pulls them out 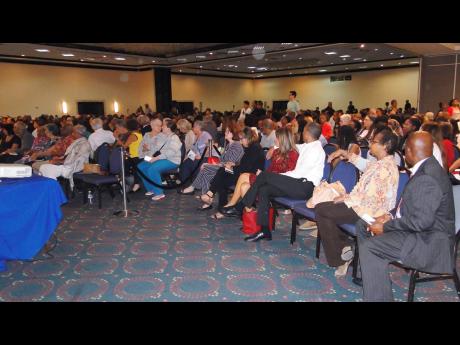 Paul Williams
A section of the audience that turned out at The Jamaica Pegasus in St Andrew on Tuesday. 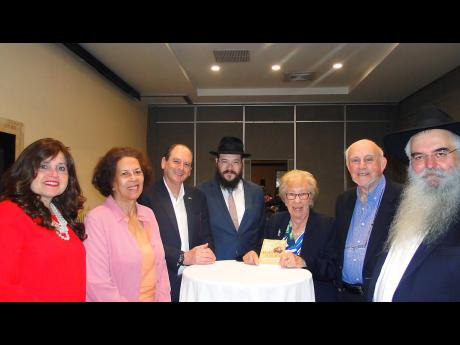 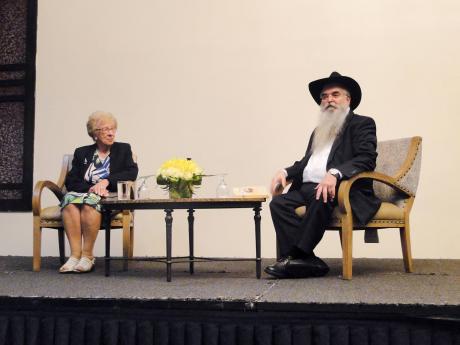 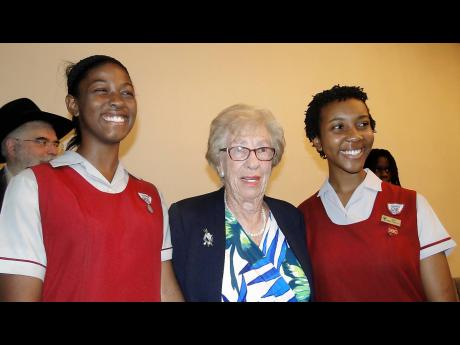 Paul Williams
From left: Eleven A religious education students at St Andrew High School For Girls Ryanne Gourzong and Kristen Elliott are delighted to be in the presence of Holocaust survivor Eva Schloss. 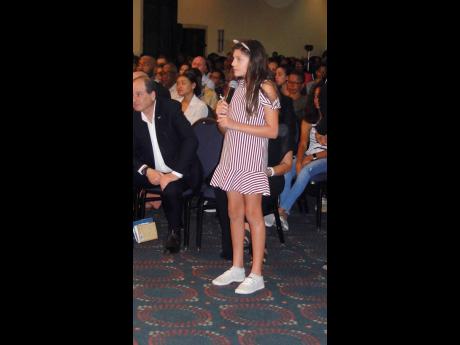 Paul Williams
A young member of the audience listens to the answer to a question she had asked Holocaust survivor Eva Schloss. 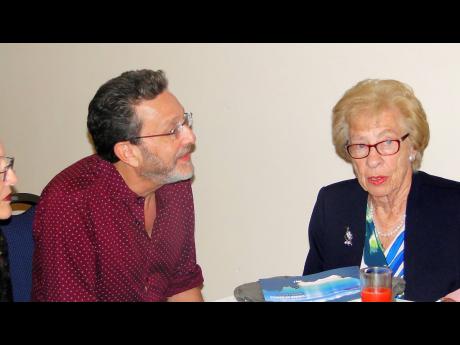 Paul Williams
Joseph M. Matalon of the ICD Group, stares in admiration at Holocaust survivor Eva Schloss. The ICD Group was a sponsor of the event.
1
2
3
4
5
6

On Tuesday, April 2, it seemed like the entire Jewish community in Kingston and St Andrew had gone out to see and hear Jewish Holocaust survivor Eva Schloss tell her story of inspiration.

There were people from other parts of the island, and many had flown down from North America to seize the opportunity to hear her speak.

Initiated by Chabad Jamaica, A Historic Evening with the Stepsister of Anne Frank was managed by Melody Cammock-Gayleand and held inside The Jamaica Pegasus.

Anne Frank was a German Jew who wrote a diary about her experiences while hiding from the Gestapo (the German secret service) in Holland, during World War II. Frank met Eva Geiringer there who had fled Austria to Holland via Belgium. They were childhood friends until they were separated and taken to different concentration camps in Germany.

Eva and her mother, Elfriede, were taken to Auschwitz, having been separated from her father and brother. She, her mother and Frank’s father, Otto, survived and reunited in Holland, where Eva’s mother married Otto, thus making Eva, Frank’s stepsister, posthumously. Eva eventually married Zvi Schloss, a Jewish refugee from Germany.

Since 1985, Eva Schloss has been educating people around the world about the Holocaust, with her own story being at the centre of her endeavours. On Tuesday, led by Rabbi Wilhelm, Schloss, an amazing storyteller, kept her audience in rapt attention as she spoke about her exile to Belgium and Holland, living in hiding, and her brief relationship with Anne Frank.

Vividly, Schloss recounted her capture and interrogation, her journey to the concentration camp, her separation from her brother and father, the atrocities and killings in the camp, the stench of burning flesh, hunger, starvation, diseases, and the viciousness and evil of the female Nazi soldiers.

In addition, there was the constant fear of being separated from her mother, and they were, eventually. She also spoke about being reunited with her mother, living in the camp with dead and dying people, the arrival of the Russians who rescued them, and being reunited with Frank’s father, who was devastated by the loss of his family.

Schloss, 89 years old, has a memory as sharp as a razor. She recalled events, dates and emotions with great precision. And there was comic relief to punctuate the silence in the room. With amazing candor and a wit as dry as parched earth, she made the audience laugh, and she would segue back into the heart-wrenching, poignant details of man’s inhumanity to man that left her bitter and full of hate until she found it deep within to purge herself of what was eating her away.

The event ended with members of the audience, including young children, asking her questions and lining up to have photo opportunities with her. Her enthralling story had pulled them out, and they were only too happy to hug, shake hands with and stand beside a woman who came here with her narratives of suffering, hope and redemption.