It was a light-hearted moment – Chinese Embassy 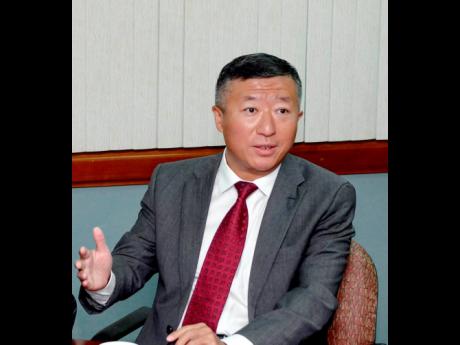 While admitting that Chinese Ambassador Tian Qi, in a light-hearted manner, commented on a photograph of Ruel Reid, the embattled former minister of education, during his recent visit to the Montego Bay Community College (MBCC) in St James, a spokesman for the Chinese Embassy said his remarks were not meant to be intrusive.

“Ambassador Tian intended to share a light moment with the audience. He has no intention of any question (about the use of Reid’s photograph),” the spokesperson told The Gleaner in an email. “We do not have any question with former minister Reid. His resignation is nothing but your internal affairs, which we do not interfere in at all.”

In the article, the ambassador was quoted as jokingly saying, ‘You need to take this down,” in reference to Reid’s picture, which was mounted alongside one of Prime Minister Andrew Holness and Governor General Sir Patrick Allen.

The comment by the ambassador sparked spontaneous laughter, especially when he further joked, “You need a new picture,” possibly alluding to the fact that sooner or later, Reid’s photograph would be replaced by one of the new minister of education.

An article that was published in Wednesday’s Gleaner under the headline ‘Chinese ambassador questions Reid’s picture at MBCC’ created a mini firestorm on social media, where several persons accused the ambassador of being ‘out of order’ while others supported his jovial claim, saying the photograph should not have been there.

“The Chinese ambassador is passing his place,” wrote one person who was clearly not pleased with what the diplomat had said. “He needs to be told that this is a Jamaican business so he should keep his opinion to himself.”

“Would you like a picture of you seated with a disgraced politician in the background after he resigned?” fired back another writer. “The ambassador is rightly protecting the image of himself and country. Mr Ruel Reid’s picture should have been down.”

In an obvious bid to put an end to whatever controversy was caused, the embassy spokesperson made it clear that no ill will was intended and that his country was only seeking to have a positive relationship with Jamaica.

“All we want is to have positive messages about China-Jamaica friendship and cooperation,” the spokesman said.