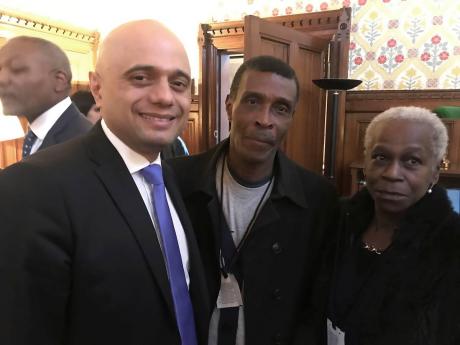 Contribution
Home Office Secretary Sajid Javid (left) shares a moment with Windrush victim Gloria Fletcher and her Jamaican husband, Derek, at the event to announce the compensation scheme for Windrush victims in London on Wednesday.

Like so many families affected by the injustice of the 1973 immigration law in the United Kingdom (UK) that led to thousands of people, mainly from Jamaica, misclassified as illegal immigrants, denying them jobs, healthcare and the right to rent property, the Fletchers – Derek and Gloria – say they feel the wind of justice finally starting to blow their way.

Although admitting that the promised compensation from British authorities would do little to placate the hurt and embarrassment caused by the UK government’s hostile immigration policy, Derek Fletcher told The Gleaner yesterday that the latest development in the Windrush saga would serve as a means for greater “understanding and appreciation of the value of human lives”.

The scheme was established for people whose lives were damaged by hostile environment policy, and the the UK‘s government has committed to paying upward of about £200 million to the people impacted and the two generations that followed in some instances, for the suffering endured.

“My wife is the real victim, but the whole thing just destroyed our family. She was the main breadwinner after I damaged my leg at the brewery. Her job paid the mortgage and we had a little business, as well.

“It was good until one day she went to work, and they said to her, ok, if you don’t show us a passport, you will lose your job.’ That’s a place she has been employed for the last 17 years as a mental-health support worker,” Fletcher said.

Things turned horribly bad for the Birmingham family thereafter. Gloria was placed on anti-depression medication on advice from her doctors after suffering a mental breakdown. She migrated to England from St Kitts in 1970, and Derek left Jamaica two years earlier in 1968 at age nine. The couple produced three children in England.

“Her hair went from black to white in a matter of three weeks. She had a nervous breakdown and had to be put on anti-depression medication and stuff like that,” said Fletcher.

Things got even worse for the Fletchers as they were unable to pay their mortgage. In addition, their children’s schooling was greatly affected. The couple’s only daughter failed while in university.

“My daughter was at university. She failed because of what was happening to her mom. Our sons and I fell out. It was devastating. So while we are happy somewhat about this compensation, it cannot fix those times we lost, the hurt we felt, or the pain we endured,” he said.

Sajid Javid, British Home Secretary, said that he recognised that the scheme “won’t reverse the damage that was caused” but believed it would go some way to “atone for the wrongs that people experienced”.

“The scheme is now open to claims, so we can compensate those who struggled to prove their status and faced hardship as a result,” he said in making the announcement in the House of Commons.

The announcement comes almost a year after the UK government admitted that its treatment of the Windrush generation had been “appalling” and promised reform of its immigration system.

The total number of those affected by the scandal remains unknown, but more than 5,000 people have been granted documentation by the Windrush task force in the past year, confirming that they have a legal right to live in the UK. At least 3,674 of them have been granted British citizenship.