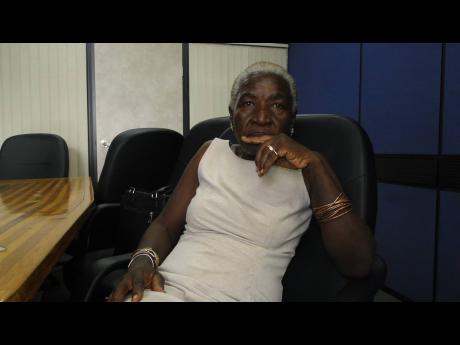 Searching for answers to her religious questions and existence, Dorette Abrahams attended Unity of Jamaica for a while. The type of Christianity she found there was practical.

Abrahams eventually left Unity and found someone who taught her about African spirituality. Then, one day, around 1993, she saw a picture of a woman wearing a big headwrap on the cover of a local newspaper. She turned out to be the wife of the Oba (diviner) of the biggest Yoruba village (in North Carolina) outside of Africa.

She got the woman’s contact information from the newspaper, and met with her in Jamaica. The woman gave her a reading, and she was told that she was destined to be a Yoruba priest. She and some other people would meet with the woman to learn about Yoruba religious traditions. Then she was told that she should go to Cuba to be initiated as a priest.

In Cuba, Abrahams was told through a reading that she would get ill, and it could only be prevented by initiation. She thought she was ready to be initiated, but was told she was not. In 2005, while she was in the United States, she began to get ill. She was told that “death was at her heels”, and that she had to be initiated immediately in Cuba.

However, she was not quick to believe what she was told about the illness. Moreover, she did not want to be initiated in Cuba, where she would have to be for three years before she could do divination. It would have to be Nigeria or Cuba.

However, she went to Cuba, where she got her Eta, new destiny guidelines for living, and was now under the guidance of a priest who was training her especially in spiritual reading. But, there was a fall out with the priest. The initiation was interrupted, and her illness was real. She was told that she would not die, unless she wanted to die.

She returned to Jamaica for an operation, but before that was told that two of the Yoruba orishas, Legba and Osun, would be with her during the operation. She said it was a scary time for her. She went around in a full white attire, and one day while she was passing the Blood Bank in Kingston she was told that a nurse inside wanted to speak with her.

She went inside, and was greeted in the Yoruba tradition. It turned out that the nurse was a Cuban Yoruba Legba follower and had recognised her to be a Yara (baby), someone who was going through initiation. Having learned where Abrahams was going, she promised to sit with her at the hospital, and went back to see her the following morning.

When Abrahams was being dressed for the operation, she was given a yellow ‘dress’ to put on. It turned out that yellow is the colour of the Orisha Osun. It was a very unusual colour to drees patients in, Abrahams observed. Then it dawned upon her.

The nurse was Legba and the colour of Osun is yellow. Legba and Osun, she was told, would have been with her. She was comforted. She said to herself, “Legba and Osun are with me. I don’t have to worry.”

Cancer was what she was told she had, and that she would need chemotherapy or radiation after the operation, but she did not do any of them. The illness and operation interrupted her initiation, and because she does not want to live in Cuba for three years, the initiation is being done from afar.

Yet, it was not always an easy road, and she had to change her spiritual guide at one stage, and sometimes wondered if she had done the right thing. For a while she was in Jamaica on her own, with no guidance, but has been going to and from Cuba for training.

Abrahams said she was told she is a “spiritist” and could do divinations (readings). She is a wind spirit whose priestly name is Oya Ade (kneeling down to pray as if begging). Oya is her ‘mother’ and Ade is the crown of Oya.

She intends to complete her training, and has no intention to return to the Christian Church, as she no longer subscribes to the concept of the Christian God. “Where I am, I am very content,” she told Family and Religion.