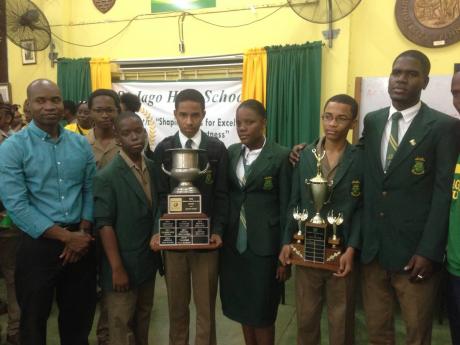 It was an atmosphere of jubilation, gratefulness and praise at the St Jago High School in Spanish Town, Wednesday morning as the school population and some parents celebrated the school’s fifth victory in the annual TVJ School’s Challenge Quiz competition.

All the available space in the school’s auditorium and the areas beyond were occupied by loud cheering and horn-blowing students who interrupted every sentence spoken by principal Collette Feurtado-Pryce with prolonged cheers.

“Simply put, this is a feel good moment for me, I am happy for the St Jago community,” Feurtado-Pryce told The Gleaner.

“Being successful, others will want to come in to join and to help us to accomplish even more,” she continued.

The principal also expressed concern about the physical space at the school which she claimed has become inadequate because of more students enrolling at St Jago High.

“Sometimes we are in spaces that are not so comfortable for classes, under trees, in our tiny auditorium, you will find up to nine classes being kept at the same time,” she lamented, while highlighting the strength of the school in academics and the performing arts.

Feurtado-Pryce observed that the school is underrated when it comes to the Boys and Girls Championships, even though it has been consistently placed in the top five.

Coaches Mark Clarke and Romeo Lee, are both past students, and who also represented the school in past school’s Challenge Quiz competitions; Clark a member of the first winning team in 1988 and Lee who was on the 2008 team that won the trophy for the fourth time were very ecstatic about the victory.

They told The Gleaner that the victory was special, “It is special because it is our 275th anniversary, my 50th birthday, and TVJ is also celebrating 50 years of staging the competition,” he said.

“We had overcome our nervousness in the early rounds so we went in the finals with renewed confidence,” he stated.

Even though he will not be around to participate in next year’s competition, Lindsey still feels confident that his team members will vigorously defend the title.