‘A nation cannot be built without strong men’ 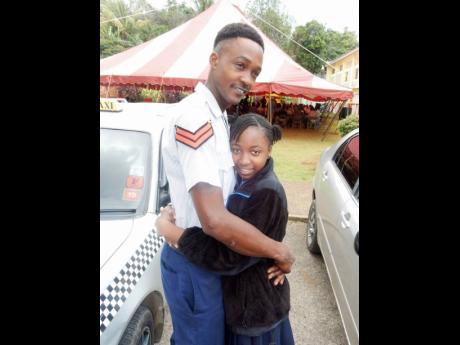 Carl Gilchrist
Happy to see her dad, Marlon Scarlett, turn up at school, grade six student Jordanique Scarlett greets him with a hug. 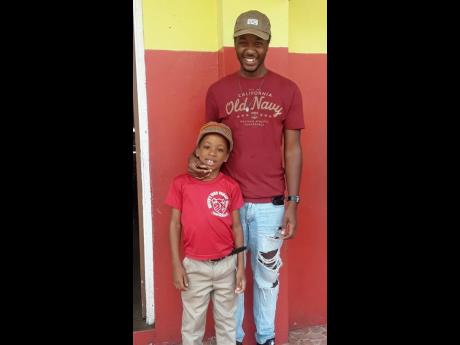 Fathers turned out in their numbers for the third annual ‘Invite Your Father to School Day’ at Brown’s Town Primary School in St Ann on Thursday, leaving principal Saloman Smith to declare the day a success.

Over a hundred fathers visited and interacted with their children in class during the morning session, bringing joy to those students whose fathers were there.

The fathers then gathered under a tent erected for the occasion on the school grounds to participate in a session led by Pastor Wesley Boynes, chairman of the Northgate Parent Empowerment Place.

Not only did they listen to Boynes’ main message that a nation cannot be built without strong men; several of them showed maturity in sharing personal stories about their upbringing and the roles their fathers played or, conversely, the absence of their fathers in their lives during that time.

The session, which was scheduled to end at 12 noon, went overtime as the fathers fully participated in the event and in the end expressed that it should be held more frequently.

For dad Ofigi Foreman, whose son, Ofigi Jr, is in grade two, it was a learning opportunity.

“I learnt that it can affect you if your father doesn’t play a role in your life, and as it was said in the session, some of the men don’t even remember their father being there for them, not even one day. But as for me, I am always in my child’s life,” he told The Gleaner afterwards.

Foreman also hailed the initiative, describing it as a great concept that shows children that their dads are really participating in their lives and their school.

“It’s a joy to be here, and I wish they could keep this more often for the fathers because most time, it’s the mothers that attend, so it’s a great privilege to come and see a full house of fathers,” he said.

Pastor Boynes also hailed the concept: “I thought it was a really, really good initiative. It really impresses upon fathers the role that they have to play in the development of their children, both boys and girls. So today was a time when we really highlighted the responsibility of the fathers and how the family is built around how the father positions himself in the home. It was a very down-to-earth interaction. To me, I was really encouraged because the men were really transparent.”

Meanwhile, the principal was happy for how the event turned out, telling The Gleaner: “It is a success. The day was good. The feedback is that they want more of this.”

But while the call was for more of this kind of interaction, Smith pointed out that such an event should not be the only occasion on which fathers visit their children at school.

Smith said that ‘Invite Your Father to School Day’ came about after he observed that fathers were quite apprehensive about visiting schools.

“I think it is important that fathers are in school. Children respond to the discipline of their father, so if the teacher is supported by the father, then it is my view that the behaviour of the child, the output of the children will also improve whilst they are in school,” he said.