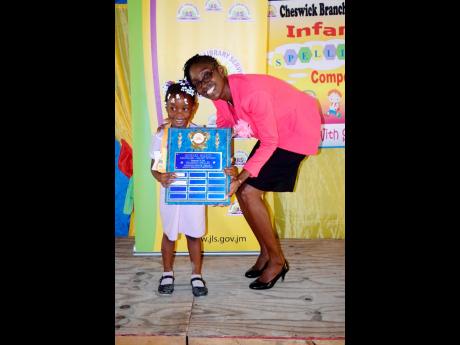 Contributed
Five-year-old Abigale Williams of Wheelerfield Basic School, who was named Champion Speller during the Infant Spelling Competition in eastern St Thomas, was all smiles while she collected her plaque from librarian at the St Thomas Parish Library, Shana-Lee Coley-Smith.

Steadfast on the journey to improve the vocabulary and reading skills of infants in eastern St Thomas and at the same time building their self-confidence, the St Thomas Parish Library in Morant Bay, in association with the Cheswick Branch Library in Dalvey, hosted the third staging of their Infant Spelling Competition earlier this year with the finals ending on March 28.

This year’s competition took on the theme ‘Go Wild with Spelling!’ and saw over 50 students, ages four to six, from some 13 schools across the parish vying to be named Spelling Champions of St Thomas.

Supervisor of the branch libraries in parish and rural development librarian Simona Spencer, told The Gleaner that the initiative has grown tremendously since its launch three competitions ago.

“The Infant Spelling Competition was launched in January 2017 with 32 competitors from eight schools.In 2018, that number increased to 52 competitors from 13 schools. With this increase, the schools had to be divided into three zones: eastern, western and central.

In the most recent staging, the number of competitors increased even though the schools participating remained the same.

The competition had three rounds: preliminary, which was held January 29 to 31, the semi-final round, February 25 to 26, and the final round, which was held on March 26, Spencer said, adding that the staging was made possible by an influx of sponsors, including but not limited to Facey Commodity, Seprod Limited, Kem-Lo Superette, Juicy’s Community Club, Flow, the St Thomas Farmstore, Golden Grove United Club, and a host of individual contributors.

Each student boldly represented their school and expressed their exceptional spelling skill, and at the end of the competition five-year-old Abigale Williams of Wheelerfield Basic School was named champion, followed by her schoolmate, five-year-old Laila Williams.

Spencer admitted that most of the students were very focused and confident coming into the competition and that one particular participant grabbed the attention of viewers based on her age.

According to her, “The youngest competitor was four years old Aria Warmington, sister of 2018 Champion Speller Jermaine Warmington. Aria, being only four, managed to spell the word ENVIRONMENT.

The librarian said that the St Thomas Parish Library and the Cheswick Branch have been involved in a number of programmes to inform and educate their users.

“We’re hoping for more sponsorship and that the schools will continue to support these initiatives.

“Also, we hope that the Infant Spelling Competition can be extended to another branch library targeting the same age group of students,” Spencer said.