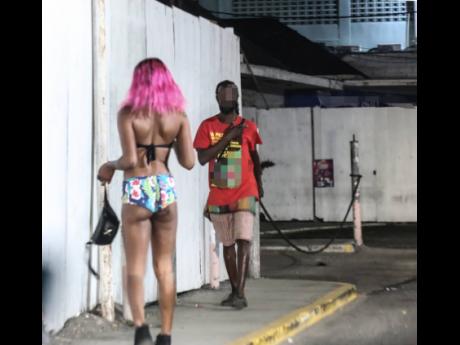 As droves of prostitutes relocate from Portmore’s Back Road in St Catherine to Montego Bay’s Hip Strip, a number of the resort town’s business operators are calling for the regularisation of the illegal trade.

The hookers have migrated to St James because of heavy competition and pressure from the police in the Sunshine City’s unofficial red-light district.

City authorities have been urged to intervene, as the sex workers flood the streets.

“Put them in a prescribed area. It is as simple as that. They can’t just be on the front every night,” tour operator Robert Hendricks told The Sunday Gleaner. “They offer a service to the industry and visitors who come to Jamaica are asking where the action is. It is a profession that is older than me and you.”

He argues that the Government has a responsibility to formalise sex work and guarantee that they are tested by the health authorities every month.

Hendricks has received support from area chapter chair of the Jamaica Hotel and Tourist Association, Robin Russell, who is also a hotelier.

Russell says that in the same way that cannabis has been decriminalised, prostitution, likewise, must emerge from the shadows. Specific government-sanctioned zones should be established and stipulations crafted to govern the mode of operation, he said.

“They are harassing husbands walking with their wives. This cannot be right,” Russell told The Sunday Gleaner, adding that the situation had become a major problem for the police, who find it difficult to lay charges unless they have been caught in the act.

“I would endorse regularisation similar to what Amsterdam has done by constructing a red-light [district] or what Las Vegas has done. These are precedents that we can easily adopt and follow,” he said.

Hendricks, who has been a stakeholder in the tourist industry for more than 40 years, posited that the sex trade was a component of the hospitality sctor and that some interests would be willing to pay licensing fees, which would be sure money in the Government’s coffers.

Former member of parliament and Montego Bay publisher Lloyd B. Smith has called for a pragmatic reaction to prostitution, which, according to him, cannot be stamped out.

“Regularise it to the extent it will not offend other business operators or curtail their businesses,” he declared.

A long-standing advocate of the decriminalisation of sex work, Smith, who is a former deputy speaker of the House of Representatives, said that prostitutes have swamped Montego Bay.

“Every nook and cranny in Montego Bay is flooded with them. If they didn’t have customers, it would not be so proliferated. Obviously, they are satisfying a need,” he said.

Smith believes that sex workers should be subject to official state-sanctioned testing every three months to insulate them against the spread of sexually transmitted diseases.

“If possible, they should pay some type of tax. They should have an ID issued by the municipal authority or the Ministry of Health and they should be plying their trade in a specific area, not roughshod all over the city,” he insisted.

Prostitutes can even be found in certain churchyards, which amount to sacrilege in the eyes of Christians. Tombs in the cemeteries have not escaped the ladies of the night, and according to Smith, youngsters are being exposed to full frontal lechery.

“They are offering the boys coming from school a quickie. We have waited too long to deal with this,” said the publisher, affectionately called ‘The Governor’. “The time is now right to do something about it.”

The prostitutes who agreed to speak with The Sunday Gleaner approved the idea of a special district, stating that they are faced with immense problems on the streets.

“From gunman, to all kinda people. Them wicked to we. Them stab we up. Them abuse and fight we,” lamented a young woman who goes by the moniker ‘Apple’ and works three nights per week on the Hip Strip, owing to the fact she attends school.

“A nuff rape and suppen deh me stop because once the men know they can buy from us, there is no need for them to rape. Some man wi’ nuh know how fi approach certain woman, but them know how fi approach we in the street, because we are more down in their class,” another stated during the interview.

The women who have left Portmore for MoBay say that business is better there.

Neither of the women who spoke with The Sunday Gleaner has ever been raped on the streets. However, men have tried to abduct them with the intention of killing them, they say.

“We walk sometimes with wi ratchet and the police them lock we up,” said ‘Foxy’.

Accused of leaving used condoms in plain sight after their jobs are completed, Apple said that she always cleans her area.

“We get a bucket, throw them in after they are used, and at the end of the night, one of us volunteers to empty it. If all of us were doing so, it would be a better place, but most of the condoms found in the area in the mornings are the new girls who just do them thing and just lef’ them.”