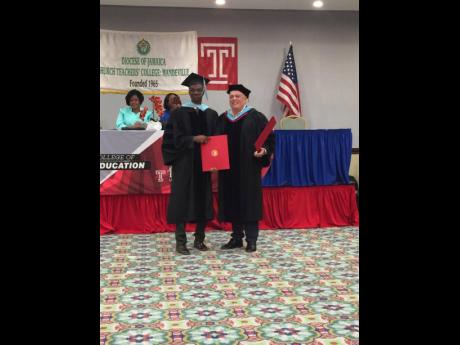 Contributed
Howard Harvey receiving his Doctor of Education degree at a graduation ceremony in Montego Bay last weekend. The degree was in collaboration with Church Teachers’ College.

Last weekend when Howard Harvey collected his Doctor of Education degree from Temple University in Philadelphia, Pennsylvania, one couldn’t have dreamed that the one-time windscreen wiper would achieve one of education’s highest honours.

Back in 2013 when Harvey’s story was carried by The Gleaner, he documented how he grew up in the inner-city community of Maxfield Park in Kingston and hustled wiping windscreens during the 1970s and ’80s as a means of helping his family and to support himself, as his parents had nine other children.

“As the eldest one, the responsibility that was thrust upon me from early is to be a leader, to be a breadwinner ... . I realised that their money wasn’t enough, so I had to be responsible for myself, so ... that earning pulled me out of school and put me on the street,” Harvey told The Sunday Gleaner.

From gang leader to leaving high school with no certification, today he is the career development officer at the LEAP Centre in Kingston and now lectures part-time at HEART and two universities. He is also involved in community social work as a motivational speaker in schools, churches and business organisations.

It took Harvey six and a half years to complete his PhD, and it was not without challenges.

“What I had to do is spend late nights at local food places to get access to the Internet to do my work sometimes. I’m closing this food place,” he said in good humour. “What I would do is, I would buy a small meal while I do my project and stay there and do my project and send them off as soon as I can, because as you know, the next day is work,” said Harvey.

It was during this time that Harvey had to pick up a few lecturing stints to assist with paying for his degree.

“I had to do a lot of hustling here and there to pay my way, because the fee was in US dollars. Most of my hustling comes in the form of part-time jobs, ... so you get this kind of reward internally and it motivates you and pushes you, so that’s kind of an internal fuel,” said Harvey.

The father of three now plans to use his educational leadership and policy development degree to continue assisting young people.

“One of my objectives is to write an autobiography and to use it as some documentary to motivate young people. I want to do some research as it relates to teaching boys how to learn, because that was one of the challenges I had, and I found it very difficult in learning the traditional way until I found a way,” said Harvey.

“While I was studying, I realised that there are ways that you can teach boys without teaching them the traditional way. I would want to do some research on that.”

Harvey said his stepfather, who was instrumental in pushing him to achieve, has since passed, but there is no shortage of persons who are happy for him. He said he intends to break the news to his mother – “I don’t even think she understands what a doctorate means” – who will be elated at his achievement.

He hopes to inspire more youths from the inner city that they are not doomed to failure because of their address or their families’ financial status.

“In the community of Maxfield Park, they look up to me as somebody who’s stepping out for them. For the men on the street, I am a representative for them, for anyone struggling in school I’m representing for them, and they’re going to be proud of me,” said Harvey.

“Nobody could stop me when I was going through my struggle on the streets, and nobody can stop me now because I’m better now, I’m stronger now, because the street made me stronger,” he added.