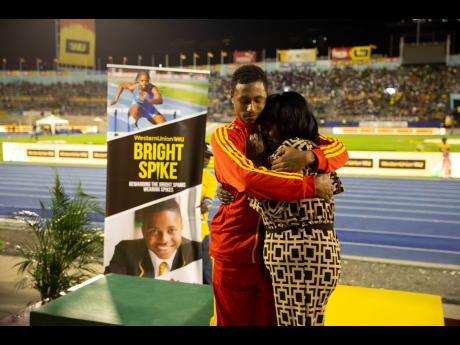 Contributed
An emotional Daniel Meggo of Cornwall College embraces his grandmother, Mary Smith, after Western Union flew her in to surprise him at the recent ISSA/GraceKennedy Boys and Girls’ Championships at the National Stadium. Meggo received the Western Union Bright Spike award for the county of Cornwall. 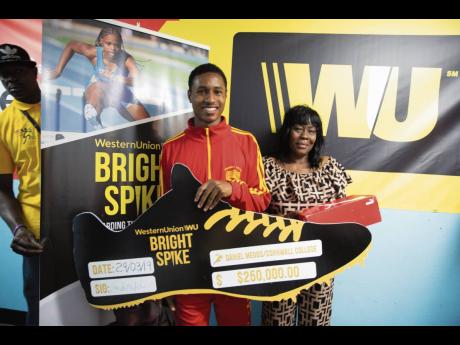 Contributed
Cornwall College’s Daniel Meggo and his grandmother, Mary Smith, pose with his Western Union Bright Spike Award at the recent ISSA/GraceKennedy Boys and Grils’ Championships. The $250,000 award, which recognises student athletes who excel on the field and in the classroom, will see the athlete getting $100,000, with another $150,000 going towards the school’s sports programme.
1
2

Cornwall College high jump star Daniel Meggo has been raising the bar for student athletes not only in the sport but also in the classroom, and has been a source of motivation for young men at his alma mater.

Two years ago, at the end of grade 11, Meggo bagged nine ones in the Caribbean Secondary Education Certificate exams – eight of which are straight A profiles – and placed second in information technology (IT), and sixth in physics and chemistry nationally. He also placed eighth in the Caribbean for IT.

Now in upper sixth form at the Montego Bay-based school, he is continuing to blaze the trail academically and received the Western Union Bright Spike Award for the county of Cornwall at the recent ISSA/GraceKennedy Boys and Girls’ Athletics Championships. The $250,000 award, which recognises student athletes who excel on the field and in the classroom, will see the athlete getting $100,000, with another $150,000 going towards the school’s sports programme.

“I am definitely honoured,” Meggo told The Gleaner, reflecting on the award.

The 18-year-old, who has a personal best of 1.95m in the high jump, said his success was a result of tremendous sacrifices.

“The experience that I have had since going through my tenure here at Cornwall College has been quite difficult, to say the least. There are, of course, many challenges that come with performing well in both academics and sports, where you have to make sacrifices. I’m just thankful that I’ve been able to achieve this.”

He continued: “After training every day, I go home tired, so basically trying to get the drive to go ahead and do my schoolwork is possibly the greatest challenge. In order to get through that, I try to do as much work as I can before my body gives in. It also depends on the amount of work I have, because if I have a lot to do, I may wake up around 3 o’clock in the morning and start studying again.”

Meggo told The Gleaner that other Cornwall College students have been looking up to him as a trailblazer at the institution, wanting to follow in his footsteps.

“I have had a few persons come up to me and say I’m their role model. Even in that aspect, it places some pressure on me because I know that I have to maintain a high standard in all aspects of my life,” Meggo said.

Principal Michael Ellis said Meggo embodies the type of work ethic and excellence which must be encouraged among student athletes.

“That’s the type of student you want to encourage, those that are multifaceted and embrace the concept of holistic education. Daniel shows that it can happen and it must be encouraged as it also prepares these youngsters for the future.

“Clearly, he puts himself in a league where he becomes a prime candidate for some of the best universities around the world. We will try to encourage as many of our boys to seek to achieve this as well,” Ellis said.

Meggo, who was very emotional when Western Union flew in his grandmother Mary Smith from Florida to surprise him on the penultimate night of Champs, said she has been very supportive of his endeavours in the classroom and on the field.

“She is also a driving force supporting me, not only showing her love, but also financially. She has been sending money through Western Union to help with my education and so on ... ,” Meggo said.

Despite offers from both local and overseas institutions, he is still yet to decide where he will pursue studies in biomedical engineering. He also said this decision will also determine whether he continues to do high jump, in which he earned a silver medal at the Western Championships and placed 13th at Boys’ Championships.