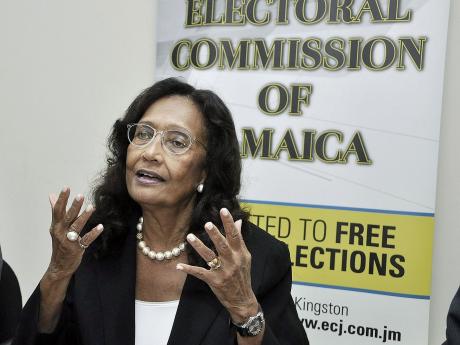 The Electoral Commission of Jamaica (ECJ) is assuring that all future elections including the recent by-election in Portland Eastern will be monitored under the amended election campaign financing legislation and regulations.

The law, which came into effect on March 1, 2018, requires that political parties and candidates report not only their campaign expenses but declare their sources of funding.

Similarly, contributors to political parties and candidates are required to declare their contributions toward the financing of election campaigns.

Speaking at a Private Sector Organization of Jamaica (PSOJ) President’s Breakfast Forum at the Spanish Court Hotel recently, ECJ Chairman, Dorothy Pine-McLarty, noted that the legislation is designed to promote transparency in the financing of election campaigns.

Howard Mitchell, President of the PSOJ, welcomed the dialogue and commended the ECJ for their efforts in implementing the long-awaited legislation.

The concept of campaign financing is not new to Jamaica’s electoral system.

Since 2011, there was a limit of $10 million on campaign expenditure for each candidate and candidates were required to submit declarations of their expenses within six weeks after an election.

The legislation and its accompanying regulations have set-out further limits, responsibilities and standards for the reporting of campaign financing.

At the same time, contributors are required to declare contributions of $250,000 or more, whether the contribution was made to candidates or to political parties.

In relation to expenditure, the maximum amount a candidate can spend in a reporting period under the Act is $15 million while a political party may incur up to $630 million in expenses.

An additional feature of the new law is that candidates may be reimbursed from an established Election Campaign Fund managed by the Electoral Commission or from the estimates of expenditure as allocated by the Government (state funding).