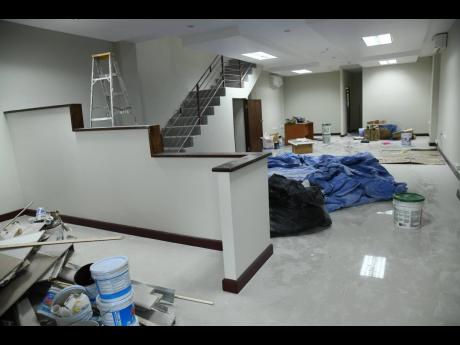 Rudolph Brown/Photographer
When The Gleaner visited the Ardenne Road office space being leased by the Universal Access Fund last week, work was still being carried out to retrofit the space. 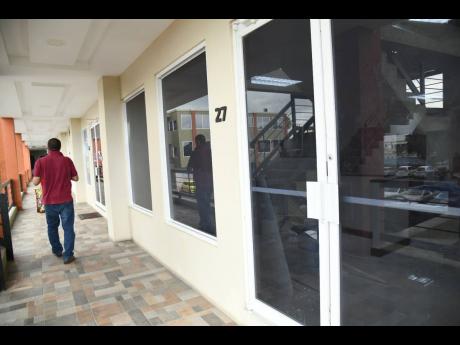 Rudolph Brown/Photographer
A man walks by Suite #27 at the Emirates building, for which the Universal Access Fund has shelled out at least $3.5 million in rent, although it is yet to fully utilise the space as intended.
1
2

The Universal Service Fund (USF) is yet to begin full operations at the Ardenne Road location it has leased, where “minor work” is being done to complete the office, according to an official.

Last month, Minister of Science, Energy and Technology Fayval Williams told the Standing Finance Committee of Parliament that the Government is spending $500,000 per month to rent the facility, even though it was unoccupied. The Government has paid $3.5 million over seven months for the empty space.

Williams said the retrofitting work on the property would have been completed by March 31, but more than a week into April, it is still unclear as to when the work will be completed. When The Gleaner visited the location last Friday, there were signs of refurbishing, but neither workmen nor office staff were seen.

Williams had said the property was leased with plans to house equipment, among other functions.

“Yes, I’m advised of a location on Ardenne Road to house server equipment, to ease the space problem, and that the budget for the lease is $500,000 monthly,” she said then, adding that the lease was undertaken six months ago.

However, USF Marketing and Public Relations Officer Deleen Powell told The Gleaner that a few staff members began utilising the space in March, even though the retrofitting has not yet been completed.

“Minor work is being done, but we already started using the space as of last month. It was an empty office space, and so we had to put certain facilities and infrastructure in place to make it suitable for use as an office, so it’s not a case that we were trying to refurbish a building, it was a big, open, empty space which was never used,” Powell said.

Attempts to get a comment from USF CEO Daniel Dawes have been unsuccessful.

The USF is one of a number of agencies under the science, energy and technology portfolio that have come under scrutiny because of allegations of nepotism.

In 2012, the USF replaced and assumed the responsibility of the Universal Access Fund Company Limited, which was established in 2005 with the main objective of collecting and managing the service levy from companies operating in the local telecommunications sector on international calls terminating in Jamaica. Its mandate had its genesis with the Telecommunications Act (2000) and was a subsidiary of Spectrum Management Authority Limited.

The USF is a statutory entity geared at facilitating the provision of universal access to the information superhighway by accelerating the deployment of broadband services islandwide. The USF also covers the collection of universal service obligation levy and funding for the e-Learning Project.

(EDITOR'S NOTE: A previous version of this article incorrectly stated that USF Marketing and Public Relations Officer Deleen Powell had indicated that only "minor work" had so far been done so far at the facility.)