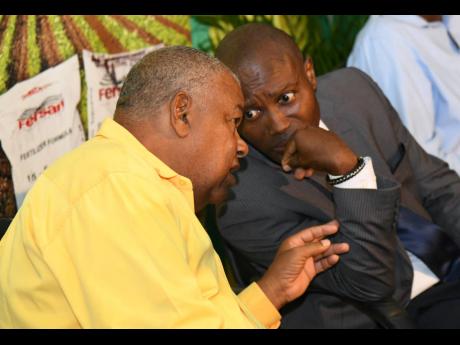 Rudolph Brown
Lenworth Fulton (left), president of the JAS, is engrossed in conversation with Courtney Cole, chief technical director in the Ministry of Agriculture and Fisheries, at the launch of Farmers’ Month in Kingston recently.

The conversion of prime farmland in St Catherine into residential developments has come under withering criticism from Lenworth Fulton, the president of the Jamaica Agricultural Society.

Developers have, over the last decade and a half, been building out a range of housing schemes across swathes of farmland in St Catherine. Among the developments is construction of a residential complex at Bernard Lodge that had ground to a halt years ago but will be completed by the China Harbour Engineering Company.

The Government also plans to build out a new city in Bernard Lodge on 4,600 acres over an estimated 18-year period.

But Fulton charged that the expropriation of arable land for non-agricultural purposes was ill-conceived and threatened the country’s food security.

“I urge the Government to move with all seriousness to developing a comprehensive, practicable land-use policy. In particular, we, the farmers, want to see the majority of arable lands stay in agricultural production, and not be subsumed to urban infrastructure and housing. I make particular reference to the Bernard Lodge lands, some of the very best farmland in this region and even the hemisphere,” said Fulton at a recent launch ceremony at the JAS’s headquarters.

“We recommend that pending and future housing developments and urban expansion make use of marginal lands. And that, by keeping our agricultural land in agriculture and making smart choices in blending infrastructure and transportation ... we can potentially stave off the worst effects of climate change.”

Fulton made it clear that farmers were not interested in handouts but wanted incentives such as subsidies on land preparation, a one-time benefit that has been discontinued.

“Agriculture is not something the planners are thinking of because 63 per cent of the land is not suitable for agriculture and percentage of arable available for farming has fallen to about 19.5, a decline of almost eight per cent over a 50-year period.

“So this now is a direct contributor to food insecurity because we are taking more of the little arable land out of agriculture and becoming more food insecure based on that,” he lamented.

By failing to provide significant support for small farmers in the 2019-20 Budget, the JAS president also criticised the Government for facilitating the expansion of Jamaica’s yawning food import bill.

While commending the relief offered to various sectors announced by Finance Minister Dr Nigel Clarke, Fulton said that taxes on key chemical inputs such as nematicides, herbicides, rodenticides and molluscicides were still as high as 20 per cent.

“We have to point out to that overall, this is not a farmer-friendly budget,” the JAS president declared.

The compound impact of high taxation made domestic agricultural production in which small farmers are the main investors even less competitive, the agriculturalist warned.

“By selling to the farmers at that rate when they are already uncompetitive, you are really creating an avenue for imported goods to come in, whether intentionally or not,” he told The Gleaner.

“Because if are we producing goods which are already too expensive, retaining this high taxation will surely push prices up and make imported goods more attractive and eventually put the small farmers out of business.”

The JAS president cited the marginalisation of the People’s Co-operative (PC) Bank, which has been downgraded to an intermediary for the Development Bank of Jamaica, as a further blow to the enterprise and independence of small farmers. He suggested that a recapitalisation of this grass-roots financial institution was a crucial support mechanism for agricultural investment.

“Government needs to come in and take over the PC Bank and put it on the market so that investors can take it up. It doesn’t make sense we have a special bank for farmers and it’s not functional. If you go there to get a loan, it takes you up to three months.

“By that time, the crop dead or you fail. So an agricultural loan can’t be like a construction loan; it has to be time-sensitive.

“Farmers need the same response as when you apply for a motor vehicle loan, like what there is for furniture, where as you go in you come out with your TV or table,” he said.