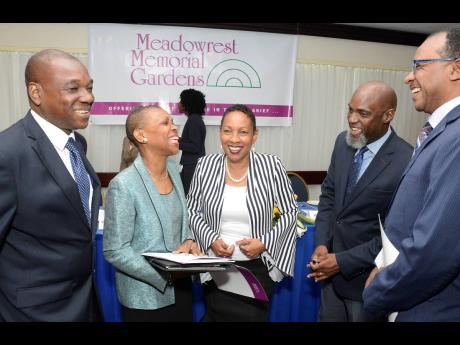 The long-awaited regulations to govern the operation of funeral homes and mortuaries is yet to reach its final resting place, despite numerous promises from government officials to make it a priority. However, Health Minister Dr Christopher Tufton has vowed that its passage will not go beyond this financial year.

An apologetic Tufton told funeral directors and operators yesterday that the Public Health Funeral Establishment and Mortuary Operations Regulation is still being discussed among the agencies that will ultimately decide on the final proposals to be passed through Parliament into law.

“It has gone a few times from the chief parliamentary counsel back to the ministry [and] stakeholder consultations. I know during my tenure to date, I have had, I would say, at least four or five meetings involving segments of your sector,” he said during the Meadowrest Memorial Gardens’ annual appreciation and celebration of funeral directors at The Jamaica Pegasus hotel yesterday.

“Collectively, as a Government, we really ought to have advanced the process a little more than it is now. It is true that we had established guidelines for the operation of funeral establishments and mortuaries that was published, I think back, in 2014, and those guidelines would almost – but not exactly – mirror the legislation,” he said.

The minister said he did not wish to set a date for the passage of the regulations, given that several windows announced previously have been missed.

“I am told that the last set of feedback, if you will, from the chief parliamentary counsel has come back to the ministry,” he said.

There has been mounting pressure for the passage of new legislation to regulate the funeral services industry after several infractions by rogue operators have created added further grief to mourning relatives and created public-health concerns.

“It comes across almost as a free-for-all, where every and anybody can be a funeral director,” said Tufton.