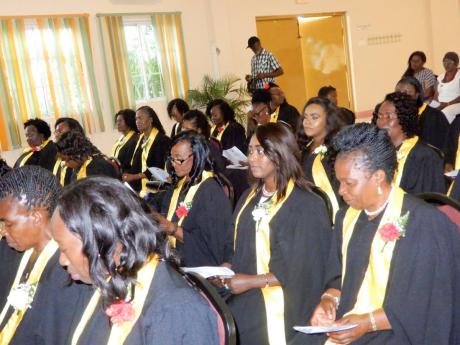 Arising out of a study conducted by Jamalco, which showed the need for significant training in the teaching of numeracy and literacy at the early-childhood level, the ACEP (Advancing Childhood Education Programme) was designed with the first cohort graduating in 2013.

The Mico University College was contracted by Jamalco to develop a one-year certificate programme in early-childhood education and deliver it initially to 150 early-childhood teachers in Clarendon and Manchester in 2012.

All trainees who successfully completed the programme received a Mico University College certificate and eight academic credits that can be used towards satisfying the requirements for a bachelor of education degree in early-childhood education.

Fast-forward to 2019 and the programme has now come to a close with the fifth cohort graduating last Thursday at the Wembley Resource Centre in Hayes, Clarendon.

Commenting on the ACEP, Programme Director of Human Resources, Security and Corporate Services at Jamalco, Christopher Buckmaster, said the research which was done in 2009 indicated that 42 per cent of early-childhood students in Clarendon and 33 per cent in Manchester were not reading at the required level.

“It was those alarmingly low rates that stirred us into action and forced us to intervene and try to change, as best as possible, the academic outcomes of elementary students in our operating areas,” he said, adding that many teachers at the basic-school level are poorly trained or pretrained and are ill-equipped to help their students achieve the necessary mastery.

“We invest in improving the early-childhood system in central Jamaica instead of trying to implement remedial strategies years later, when the damage would have been too great to easily fix.

“Jamalco was driven by a singular objective – to increase to 80 per cent the number of students reaching proficiency in reading and writing at the early-childhood level over a five-year period,” said Buckmaster.

The programme was funded by the Noble Foundation.

Keynote speaker Trisha Williams-Singh, chairman Early Childhood Commission, while congratulating Jamalco on the proactive action taken to address the gap in early-childhood education, made the recommendation for everyone – parents and educators – to arm themselves with the same training.

“Everything that we do as a parent, as an adult as an educator should be about them – the child, safety and standards, that’s all they want,” she said, sharing statistics on Clarendon’s early-childhood education.

“We are seeing 259 early-childhood institutions, 57 are average – meaning they get absolutely no subsidy from taxpayers, 42 are public (government-funded), 160 are public/private (receives a government subsidy),” she shared, pointing out that only 10 of the amount attained outright standards.

She urged the graduate to go back to their early-childhood institutions armed with the training to make a difference in the lives of the children in their charge.