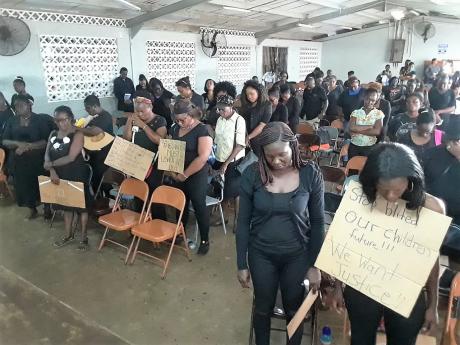 File
Teachers and staff of Central High School in May Pen, Clarendon at a meeting recently where they agitated for the resignation of the school's chairman, Henry Morant.

Henry Morant, the man who was appointed chairman of Central High School and to the board of Glenmuir High School even as he awaits a trial for murder, has stepped down from both positions, the Ministry of Education has confirmed.

Further, a team from the ministry is now meeting with teachers and other employees at Central High to inform them of Morant’s resignation and the “procedures as to what will happen next”.

People’s National Party (PNP) caretaker for central Clarendon, Zuleika Jess, who first raised the issue, welcomed the news saying it was the “right thing to do” in the circumstances.

“We must ensure that we never again find ourselves in such a precarious position whereby a person charged with a serious criminal offence such as murder is appointed to serve on a government school board,” Jess said in a statement.

She acknowledged that the existing fit and proper criteria only exclude persons with a criminal conviction, but suggested that they need to be revised “to preclude a repeat of this unfortunate situation”.