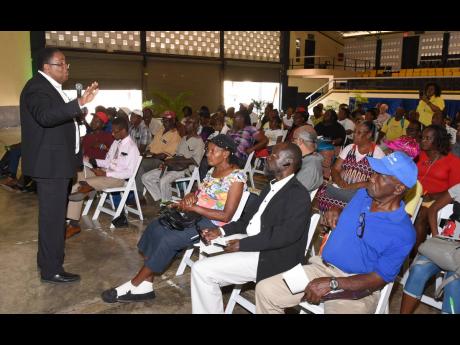 A university lecturer is encouraging farmers across the island to adopt climate-smart practices in order to mitigate the impacts of natural disasters.

Dean of Science and Technology at The University of the West Indies, Mona (UWI), Professor Michael A. Taylor, said that with rising temperatures, unpredictability of rain, drought, and other climatic phenomena, farmers will have to “rethink” their methods.

He said that having reliable access to water was a key area that must be taken into consideration.

“Whether it is capturing the water when it falls naturally, whether through mulching techniques or making micro dams on our property, whether it is water harvesting, these are the critical areas we should consider,” he said.

Taylor was speaking at a Farmers’ Month public lecture at the University of Technology (UTech) in St Andrew on April 10.

It was hosted by the Rural Agricultural Development Authority in partnership with the Jamaica Agricultural Society (JAS) and Newport Fersan Jamaica Limited.

Additionally, Taylor said that consideration must be given to the planting of crops that are more climate resilient.

“So the varieties of crops matter, and we have to go after the ones that are drought-resistant or resilient. We have to think about creating farming that can withstand the vagaries of the climate that we currently have,” he said.

UWI lecturer of sustainable development, Dr K’adamawe K’nife, who also addressed the session, cited forestry management, including the planting of tree crops, as a strategy in addressing climate change.

He argued that in addition to providing a source of income, trees help to remove carbon dioxide from the air, storing carbon in the trees and soil and releasing oxygen into the atmosphere.

“As farmers, you may want to plant more cash crops, but the reality is that tree crops are a more sustainable source of income. Tree crops actually generate a significant amount of wealth, and what you want is increased planting of trees,” he said.

For his part, Lenworth Fulton, president of the JAS, said that his organisation wants to collaborate more with institutions of higher learning to impart knowledge to the nation’s farmers.