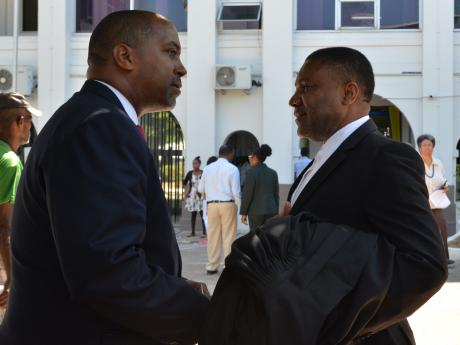 A brief statement issued by the Office of the Prime Minister (OPM) today said the government was carefully reviewing the court's decision and would provide a fulsome response later.

A panel including Chief Justice Bryan Sykes, Justice David Batts and Justice Lisa Palmer Hamilton, unanimously ruled that aspects of the controversial identification act are in violation of the Constitution and has declared the entire law null and void.

The act was challenged by the People’s National Party (PNP) General Secretary Julian Robinson who argued that the Third Schedule of the Act was unconstitutional and likely to breach rights guaranteed under the Charter of Fundamental Rights and Freedom 2011 Constitutional Amendment.

Additionally, he said the legislation would also breach the right to equitable and humane treatment by any public authority, as well as the right to freedom from discrimination on the ground of race, place of origin, social class, colour, religion or political opinions.

The court decided that the offending sections could not be severed from the rest of the statute and therefore the entire law was improper and had to be declared unconstitutional. While the judgment was unanimous, the judges arrived at this position for different reasons.

Justice Sykes said the regime as it presently stands does not offer sufficient protection for the sensitive data that is to be collected.

Justice Batts said the contemplated scheme is reliant on its universal applicability and on its mandatory components and therefore cannot survive severance of the offensive provisions.

Justice Palmer Hamilton also agreed with Batts that severance could not be effected because when mandatory provisions are removed, the essence of the legislation is lost.

Opposition Senator Donna Scott Mottley, who was also a member of the PNP’s legal team lead by Michael Hylton, QC, said the ruling was fair and in tandem with the provisions of the Constitution.

“We are absolutely delighted with the ruling; we believe that in all things the Constitution must triumph, and that we see today that the people’s voices were heard,” Scott-Mottley said.

She contended that while Jamaica can benefit from having a National Identification System, such a system must not impair the rights of the people.

“Good intentions cannot permit you to breach the Constitution and we will not allow as Opposition that constitution will be breached,” she said.