It’s all about stones, almost 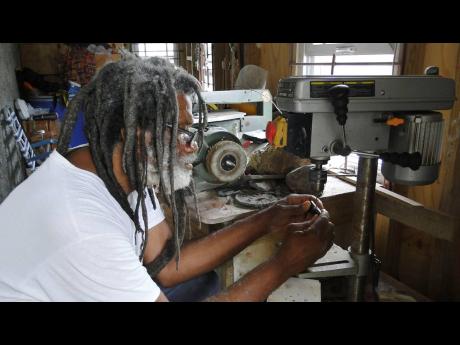 Paul Williams
Ras Mel piercing a pendant in his workshop.

Ras Mel went to England on a personal matter, but he stayed 39 years, becoming a British citizen.

From Britain, he took a trip to West Africa to learn about his roots and culture. In Ghana, he saw people extracting gold from the sea. Before that, the washing machine technician and automobile spray painter had an interest in how to make rings and how to solder silver and gold.

What he saw in Ghana strengthened his desire to learn about jewellery and jewellery-making.

Upon his return to London, he left his regular jobs to study jewellery. He enrolled in Holts Academy of Jewellery to learn to make rings and to learn about the jewellery trade. From scratch, he learned to make rings from silver, gold, diamonds, and pearls.

Yet, with that training in working with metal, he fell in love with semi-precious stones, after seeing a piece of amethyst. He applied some of the knowledge of making metal jewellery to working with stones, which he found himself doing regularly.

“I started to realise I was getting more connected to stones, and I just started to work with stones,” he recalled.

There were many types of stones that he saw in the United Kingdom, but upon his return to Jamaica, he saw some that also captured his interest. He has returned home permanently, and spends his nights and days working with metals and semi-precious stones, fashioning them into eye-catching pieces of jewellery.

However, Ras Mel has made it quite clear that it is not a spiritual connection that he has with stones; it is all about the aesthetics, how they look and are textured. He has much respect for them because of the long time it has taken for them to be formed. To learn more about them, he has bought books.

Ras Mel has taught himself to cut, polish and pierce and has invested in machines to make the work much less tedious. Still, he said, there are other pieces of equipment that he needs to produce at a faster pace.

And although he makes his pieces from his own materials, he said that should anybody take their materials to him, he can turn them into whatever they want.

He cuts, polishes and pierces stones, combining them with copper, brass, gold and stainless steel.

“I enjoy working with stones. I love stones, and I don’t want to do anything else,” he revealed.