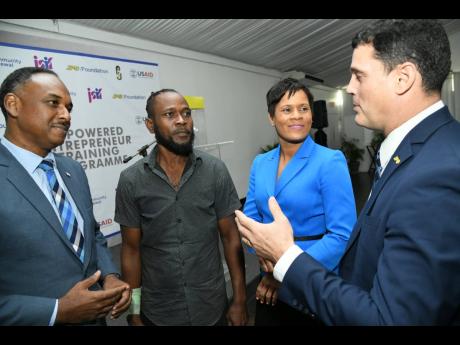 The Jamaica Public Service Company Ltd (JPS) has set 51 residents of Majesty Gardens in St Andrew on a sustainable path to ensuring that their electricity bills are paid as well as organising their lives through its Empowered Entrepreneurship Training Programme (EETP). The training lasted for little more than a month.

The JPS embarked on this initiative with the United States Agency for International Development (USAID), the Jamaica Social Investment Fund, and the Planning Institute of Jamaica.

“Majesty Gardens is one of the communities from which we had the highest losses,” Marilyn McDonald, manager of the JPS’ community renewal department, told The Gleaner earlier this week at the Build Your Business Expo at the Spanish Court Hotel, put on for the group that participated in the EETP.

“Majesty Gardens was chosen because it is a project area we are working in. We started electricity regularisation, and we moved from less than 11 customers to more than 700 in the past four years. A partnership was the way to go since JPS could not do it alone. From the partnership, we initially connected more than 250 persons with standard post wiring.”

McDonald said that the USAID provided support with its safety model known as the ready board, “where we would find the strongest space in the house and you would be able to get electricity.”

“USAID approached us again and said they have an entrepreneurship programme that they have done in other countries like Kenya, India, Indonesia, with vulnerable communities. We said ‘OK, let us try it in Majesty Gardens’.

“When these trainees came, they knew money, but they had no idea of record keeping. As for how to manage a business, and so on, they had no idea of that, so they weren’t doing record keeping, planning, keeping stock of their income and outflows. Some of them didn’t even know how much money they made at the end of the day in terms of the business. The training programme would have taken them through that.”