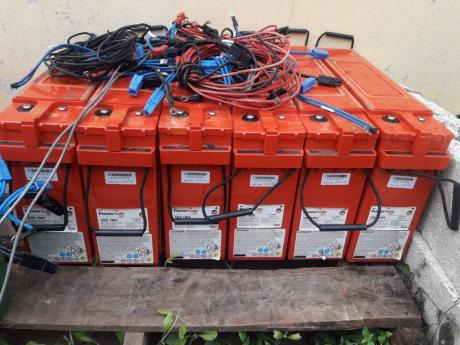 Contributed
Some of the batteries recovered by the police.

One man, a 38-year-old barber and sound system operator of an Ocean Ridge address in Gulf, Norwood, was arrested in connection with the seizure.

“We carried out an operation at a house in the area (in Norwood), and we were successful in recovering over 41 stolen batteries. One male suspect has been taken into custody, but he is yet to be charged,” the investigator added.

It is understood that the batteries, several of which had been reported stolen on Tuesday of this week, were recovered during the six-hour operation that began at noon in the Ocean Ridge area.

The batteries were reportedly being used by the accused man to power a multimillion-dollar sound system, which was found in a motor car parked in his yard. The batteries were also powering a solar system seen affixed to the man’s house.

The police say the value of the recovered batteries is estimated at J$2.5 million.