The Holocaust of the Jews – Part I 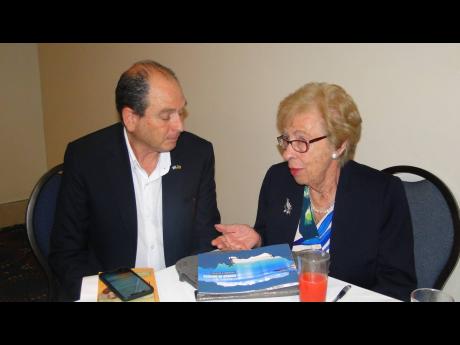 On April 2 at The Jamaica Pegasus in St Andrew, Austria-born Eva Schloss, a Holocaust survivor, told her story to a capacity audience that listened in rapt attention. Her book, Eva’s Story, was also on sale.

Schloss posthumously became the stepsister of Anne Frank, who documented, in her diary, her time while hiding from the Gestapo (German secret service) in The Netherlands. While Schloss survived the atrocities at the Auschwitz concentration camp in Poland, Frank did not survive the Holocaust of World War II, from 1938-1945.

The word ‘holocaust’ means ‘destruction or slaughter on a mass scale’, but historically, the Holocaust ( Sho’ah in Hebrew, meaning catastrophe) refers to the extermination of over six million Jews by Adolph Hitler’s Nazi Party, also known as the National Socialist German Workers’ Party, during World War II.

Yiddish-speaking survivors call it the Hurban, the word used to describe the first temple in Jerusalem by the Babylonians in 586 BCE and the destruction of the second temple by the Romans in 70CE. Sho’ah is the term preferred by the Israelis.

But why was this systematic killing of a race of people carried out? Many books, articles, essays, academic theses, documentaries, etc, have proffered various reasons for the onslaught. The research is endless, and the perpetrator himself, Adolph Hitler, is long dead.

The Austria-born Hitler legally assumed power in German on January 30, 1933, as the head of a coalition government. His first objective, which was achieved, was to consolidate power and eliminate political opposition. His efforts to annihilate the Jews began on April 1, 1933, with the boycott of Jewish businesses. That was the prelude to the Holocaust of the Jews in Europe.

It is said that Hitler did not like the Jews even before he became leader of the Nazi Party and assumed power in Germany in 1933. His early writings consisted of anti-Jew rhetoric (anti-Semitism). He saw the Jews “as an evil race struggling for world domination”.

It is also written that the Nazi anti-Semitism was rooted in religious anti-Semitism, which evolved into political anti-Semitism. Another dimension, racial anti-Semitism, has been regarded as one of the main reasons Hitler was hell-bent on getting rid of the Jews, who he believed, according to www.britannica.com, were “racial polluters, a cancer on Germany society”.

The research has found writers who say the Nazis regarded the Jews as untermenschen (German for subhumans). The Jews were perceived as an impure race by the Nazis and not as a religious group. And swirling around in Hitler’s head, some writers claim, were the notions of territorial expansion (more living spaces for the German people) and racial supremacy.

Thus, Hitler and the Nazis embarked on a campaign of occupying all of Europe and the elimination of “imperfect” people: Jews, Romanies, the Gypsy, homosexuals, etc. The atrocities that were carried out by the Nazis, Hitler’s army – the Schutzstaffel (SS) – and the Gestapos were unprecedented, and when it was all over, Europe lay in utter ruins.