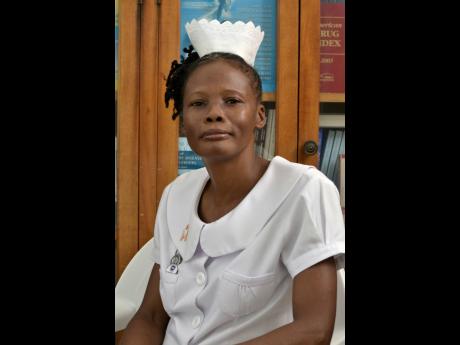 Appeals were made during last year’s round of wage negotiations for an equipment allowance to be established, but that was rejected by negotiators from the Ministry of Finance and the Public Service, says Carmen Johnson, head of the Nurses Association of Jamaica (NAJ).

“It is an islandwide challenge, a national challenge. ... Our nurses have had to be walking with their bags to offer basic level of care. Their own sphygmomanometer, thermometer, pulse oximeter, Doppler foetal monitor,” she told The Sunday Gleaner.

Johnson said that the equipment that nurses can afford is not designed for use on an industrial scale. That, in itself, poses a challenge to reliability.

“They are more for personal use, so when you take a blood-pressure machine that should only be doing your blood pressure at home, maybe three or four times for the day, and if you are doing 20 persons’ blood pressure at least twice per shift, it’s going to break down quickly,” said Johnson.

Johnson said that she was informed that regional health authorities were mandated to purchase much-needed equipment, but procurement numbers have fallen short of the required inventory.

Last month, it was reported by The Gleaner that one hospital lost more than 50 nurses who had resigned and were taking up offers overseas. The NAJ president believes that poor working conditions continue to play a major role in healthcare staffers being wooed overseas.

“It’s an issue that needs to be solved because the majority of our nurses said that it’s because of the poor working condition, which includes poorly kept facilities, inadequate equipment.

“You have to be walking from one ward to the next. Some of the nurses who really want to function purchase their own, some of the others decide that they are not purchasing it, because they shouldn’t be buying it, so they just don’t walk with any,” Johnson said.

“So you waste time borrowing when you should be assessing two, three patients. You are walking around the compound seeing what you can get.”

Errol Greene, regional director of the Western Regional Health Authority, said that he was aware of the complaints from nurses that they were forced to use their own equipment. As part of the collective bargaining agreement, this practice was to be discontinued, Greene told this newspaper.

“As for my region, the last time I checked, I was assured that the purchases were done,” he said.

“... I am not sure if there was anything outstanding for any of the other three regions, but the last report and update I got from Western was that we were in full compliance.”

Greene said that he had been liaising with the chief nurse to receive regular updates on the supply problems but assured that “the last time I spoke to her, she said she had no complaints”. Blood-pressure machines were among the items purchased.

“These are things that are routinely ordered, so I am not so sure why there was a breakdown. As a matter of fact, even while this was going on, we found additional supplies in our warehouses that we were able to send to the different hospitals and health centres in the region,” said Greene, who was transferred from Kingston Public Hospital last year.

“Instructions were given by the permanent secretary for it to be done, and this was something that we had to give regular updates to the Ministry of Finance and to the NAJ on.”

Four hospitals are within the purview of the Western Regional Health Authority: Cornwall Regional, Falmouth, Savanna-la-Mar and Noel Holmes.