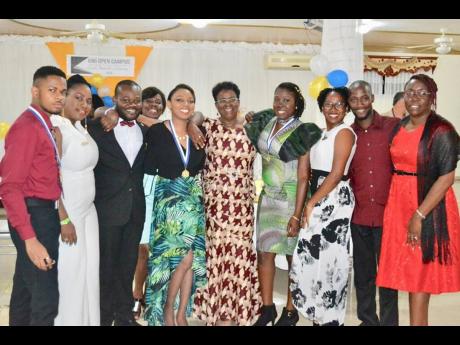 The Guild of The University of the West Indies (UWI) Open Campus in Ocho Rios and Brown’s Town, St Ann, have, taken up the responsibility of ensuring that outstanding Open Campus students are recognised, with the inaugural Guild Awards Ceremony on Friday night.

With the awards ceremony set to become an annual event, students at the Open Campuses can now look forward to formal recognition for their efforts.

“The awards ceremony is meant to highlight the great achievements of the students as this is one of the mandate of the Guild,” regional vice-president and chapter chair for the Brown’s Town chapter, Kedejah Green told The Gleaner.

“The fact that courses are online makes interaction a little difficult, so we decided to create a legacy for students for the future and joining two campuses when hosting events like this one,” Shaneil Jackson, chapter chair of Ocho Rios further explained.

The ceremony recognised students who have done well academically, those who have done philanthropic and humanitarian work, and also those who are part of the guild who have volunteered their service for worthy causes.

- Eleven members of the graduating class of 2018 were also recognised.

In her motivational presentation, Segre used her personal journey, which included overcoming several obstacles to achieve her goals, to inspire the students, while guest speaker Mutabaruka also used the opportunity to encourage them.

In hailing the event a success, Jackson and Green, both final-year students, agreed that the event will expand next year.

“Next year we’re planning to do it on a regional status before we graduate; so we want to create a legacy so that other students can follow after,” Jackson explained. She also commended the team for the work put in to make the event successful.

“We pretty much worked countless hours putting it together, seeking sponsorship, reaching out to persons to make this event a success,” Green said.