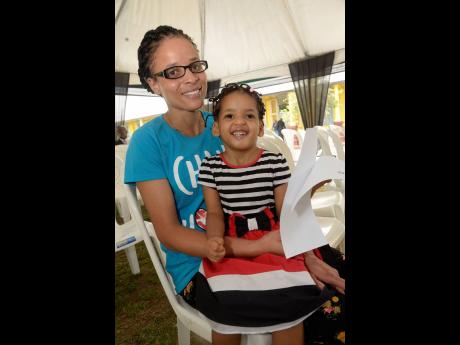 In 2015, little Ashalae Grant was diagnosed with congenital heart disease, the general term for a range of birth defects that affect the normal way the heart works. She was constantly ill, and at the time, her mother began fearing the worst.

“It was difficult because the least common cold she caught would result in hospital admission. She had two urinary tract infections; we had to find money to ... get tests done to see if there was any damage done to the other organs in her body. It was a horrible time,” Simone Palmer shared yesterday.

Her story – and that of her three-year-old daughter’s lifesaving surgery – captivated the audience at yesterday’s official opening of the cardiac centre at the Bustamante Hospital for Children.

Speaking to The Gleaner afterwards, Palmer explained that there were constant visits to doctors and hospitals for treatment of one kind or another for her little girl, who was starting to lose weight.

“She had constant fever and the doctors did multiple tests. She was so sick; she was so small. It was like her body was wasting away. To me, it seemed like she wouldn’t have made it because she needed urgent surgery, and at that time I saw no hope. I was depressed and didn’t know what to do,” said Palmer.

But there was light at the end of the tunnel.

Palmer said that while at the St Ann’s Bay Hospital, she met a doctor who introduced her to Chain of Hope Jamaica, a non-profit organisation based at the Bustamante Hospital for Children. The charity helps to provide vital medical treatment for Jamaican and after Caribbean children who are suffering from life-threatening heart disease.

Thought of going to media

But before seeking assistance from Chain of Hope, Palmer told The Gleaner that she was opting to take her plight directly to the public via the media, as time was running out and money was limited.

“I thought I would have gone to the media to ask for help because my only prayer was to see Ashalae healthy. I had two C-sections, so thoughts of losing her would have been too sad to handle. So I tried my best to keep her alive and healthy as best as I could,” Palmer recalled, adding that she spent countless nights by her daughter’s side in the hospital.

“I couldn’t even get a cool bath to help relieve the stress I was going through. I didn’t want to leave her because we are so connected. She wouldn’t allow me to leave her side, so I just had to endure, and so I bought a chair and a stool to make my bed right beside hers,” the now relieved mother explained.

Having spent many days admiring the care and effort of nurses attending to her daughter, Palmer was motivated to become a practical nurse.

“After I came back from surgery with her in 2017, I began thinking I wanted to do nursing, but because she was still recovering, I waited a little and did the course in January 2018 at the College of Hospitality and Vocational Skills in St Ann’s Bay.

Palmer, who is now employed, said that the surgery gave her daughter a new lease on life and has set her free from countless hospital visits.

“I can now sleep in my bed at nights. She is now free of heart failure, and I am now aware of certain signs and symptoms, and I am very happy seeing my daughter smiling, playing and just enjoying her life,” a beaming Palmer said.