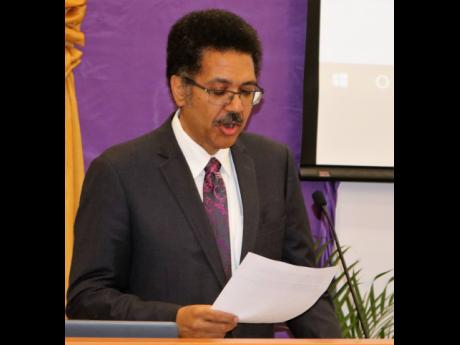 A Professor of international law, Stephen Vasciannie has been a top scholar all his life and taught at a number of institutions before taking up the position of president and pro-chancellor at the University of Technology (UTech) for a three-year term, starting on January 2, 2017.

It therefore came as a pleasant surprise when this lifelong academic recently received a valuable and inspiring lesson from one of his students. In making the disclosure at the annual awards ceremony of the UTech Faculty of Law, Vasciannie admitted it caught him off guard.

“Yesterday something happened to me and I didn’t get to appreciate it publicly. I marked some papers and I marked them, I think, in a hurry…so some students were saying, you left out this one, and you didn’t give me right for this one…’

“And somebody came to me and said, ‘Here is my paper’, and she pointed to two things; they were things that I gave her a tick for when they were incorrect. So I said, ‘Yeah?’”

By his account, the response left the principal of the university nonplussed.

“’So I have brought it back for you to deduct the marks; and I didn’t recognise her in the way I should. So we want to promote excellence in all things, including honesty and integrity.”