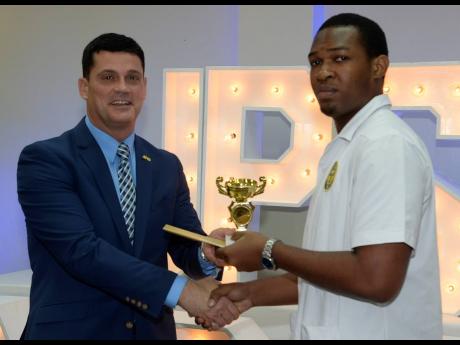 Jose Marti Technical High lower sixth-form student Mario Scott was unable read up to grade six at primary school; but he has managed to overcome a life-threatening heart condition and a plethora of other obstacles to be named among the 20 Jamaica Public Service (JPS) Foundation Top CSEC Awardees for the 2018 industrial technology (electrical) exam.

In heaping praise on his family members, teachers and friends, Scott also hailed the value of JPS, which he said has added clear direction towards him achieving more beyond his high school years.

Nineteen other students from schools across the country were treated at the awards ceremony held at the Four Seasons Hotel in St Andrew.

“I overcame a whole lot of difficulties to achieve this. Hopefully, others will do the same also. And I would like to thank JPS for this award, which has made me very happy and will give me even more drive to achieve in the future,” said Scott.

Scott told The Gleaner that the award does no signal the end of his journey, but is fuel for the start of what he hopes will be a successful foray into electrical engineering.

“I am elated, knowing that I was unable to read even up to grade six. It was an awful experience at a time when my peers were all enjoying the gratification of reading. No only that, but they were up and about playing while I had to sit and just look,” he said.

Scott noted that because of his inability at the time to be as active as his peers, he used the time to think and strategise, and not make his setback become a roadblock in his life.

“I was really and truly unable to read. It was later while in that grade that I learned to read actually, and during that time I was in and out of the hospital a lot, which caused me to miss out on my early schooling,” said Scott.