$130m in cash found at the home of ousted Sudan president 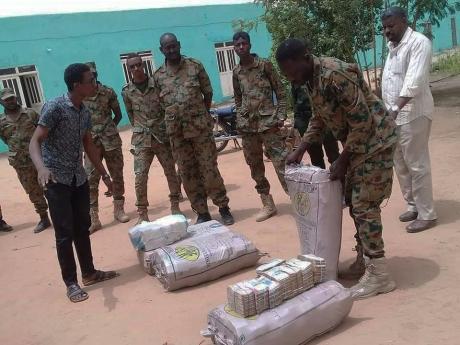 A large stash of cash, totalling $130 million, has been found at the home of Sudan's ousted president Omar Al-Bashir.

Prosecutors announced after the seizure that Al-Bashir is under investigation for money laundering.

He is being at the Kobar high-security prison.

According to the news agency, the source confirmed that Al-Bashir was under investigation, telling Reuters prosecutors would "question the former president at the Kobar prison."

A picture published by the Netherlands-based media outlet Radio Dabanga shows men in army uniforms standing over what appears to be several sacks full of cash.

The money, which Radio Dabanga says was shown to reporters, was stuffed in bags designed to contain 50kg (110lbs) of grain.

Al-Bashir was placed under house arrest after months of protests led to his removal.

On Saturday, Sudan's attorney general said a new committee would be set up to oversee anti-corruption investigations.