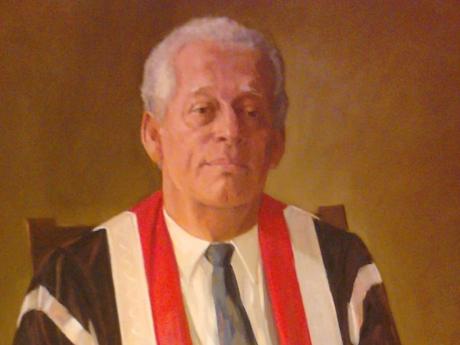 Contributed
A portrait of the late Sir Alister McIntyre

Here are the latest tributes:

The entire Caribbean has lost an intellectual giant whose monumental contribution to the integration movement will forever endure in our collective memory.

Sir Alister McIntyre devoted his entire life in service to the region. He was an outstanding CARICOM Secretary General as we moved from a Free Trade Association into the Caribbean Community. His mastery of the complex technical issues pertaining to trade, finance, and the development agenda provided the backbone for the ACP throughout the Lome negotiations.

The University of the West Indies will remain forever in his debt because of the leadership he provided to vastly expand the scope and increased access to tertiary education in this new era of technology.

I feel a very special sense of loss at the sudden departure of a highly revered colleague whose astute advice and generous support were always available within a close and lasting friendship.

I am deeply saddened to learn of the passing today of one of the Caribbean’s most treasured scholars, Sir Alister McIntyre, a respected economist, educator, administrator and true champion of regional integration.

This son of Grenada and son of the Caribbean will forever be remembered fondly as one of the Titans of the post Independence Caribbean to whom we owe much.

My association with Sir Alister goes back to my days as a young politician when Sir Henry Forde introduced me to him when we met with The West Indian Commission, which was led by Sir Shridath Ramphal, as they travelled the region consulting with Caribbean people to prepare that seminal work, which came to be titled “A Time for Action”.

The region and the wider hemisphere benefited immensely from the depth of thought and analysis that this former economics lecturer, Director of the Institute of Social and Economic Studies of the UWI (since renamed in honour of Sir Arthur Lewis), Secretary General of CARICOM, Deputy Secretary General of UNCTAD, and Assistant Secretary General in the Office of the Director General for International Economic Cooperation at the United Nations brought to the affairs of the people of the Caribbean and the world.

Shocking is the news that our Sir Alister has passed. Larger than life in his long sojourn, it is difficult to embrace the finality of this existential fragility.  The people of the Caribbean, and their University of the West Indies—which he served as Vice-Chancellor—will not be impoverished by his transition because the phenomenal richness of his contributions to their growth and transformation will continue to yield development dividends deep into the future.

The love and respect we carry in our bosom for him will bloom a thousand blossoms.

To him I say, “Farewell brother, mentor, friend, and leader.  On behalf of your cherished UWI and the regional academy you guided and grew, go well into that bright light.”