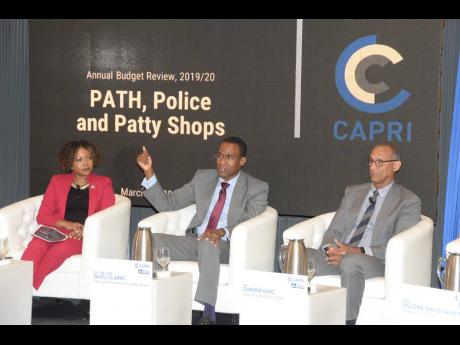 Dr Nigel Clarke, minister of finance, has said that reducing transfer tax to two per cent will boost the supply of lower-cost housing, based on the fact that costs have been reduced for developers to provide cheaper housing.

“There is significant unfulfilled demand for housing at the lower end of the market,” Clarke said.

“Therefore, we want to stimulate supply and remove barriers to home acquisition. The Government has to allow transactions to take place, and we want to incentivise supply at the lower end.”

Clarke was responding to questions from the audience about the availability of housing at such prices during a budget forum mounted by the Caribbean Policy Research Institute at the Knutsford Court Hotel recently.

He pointed out that the National Housing Trust (NHT) offered 1,500 homes for sale in St James in 2018, at a cost of about $5 million per unit, and received 11,000 applications. Clarke is a former chairman of the NHT.

“A home can be purchased on a salary of $12,000 per week, given the costs that the NHT has,” Clarke said. “The person can qualify for a zero per cent mortgage and 100 per cent financing. This would cost about 33 per cent of their income.”

“There is a concentration of private-sector developers focusing on the upper end of the market,” he stated.

The finance minister also pointed out that the challenge in Jamaica has been that transaction taxes drive up property prices twice, as developers pay the taxes when they buy land, and then the tax burden is added again when the property is sold to the purchaser.

“I saw the overwhelming demand as chairman of the National Housing Trust,” he said. “We had pieces of land, we had customers, and we had funding.

“However, we could not attract developers,” Clarke explained. “Therefore, much of the price goes into transaction cost that is not attractive for a developer, which is not governmental. By removing the transaction taxes, what we will see is more developers stepping into the market at all price levels.”

Dr Dana Morris Dixon, chief marketing and business development officer at The Jamaica National Group, told the budget forum: “The transfer tax reduction is a very significant move when we are talking about giving people the ability to own a home.

“Our organisation was founded to help people to own their own homes. A lot of young professionals tell us about their inability to own a home. They say they are leaving Jamaica because they don’t see many prospects.”

She added: “We have seen instances in which some persons work out how much mortgage they need, [but] forget that there is a huge cost related to stamp duty and transfer tax, hence it sometimes delays their transactions”.

Questioned by an audience member about what JN Bank was doing to make housing more affordable, Morris Dixon said, “Over the last few years, JN has consistently lowered interest rates across the board. In addition, we have built in more flexibility vis-à-vis the terms of mortgages.”