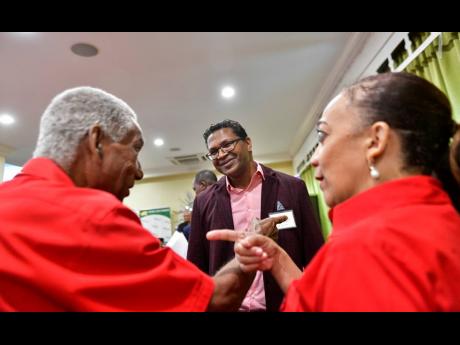 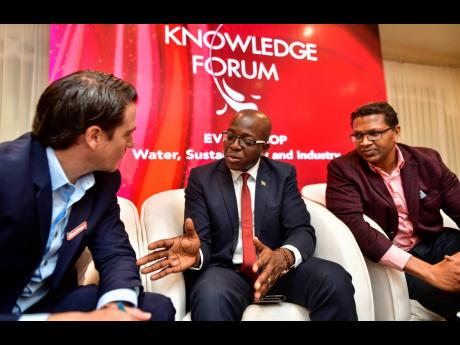 He was addressing Red Stripe’s ‘knowledge Forum’ under the theme ‘Every Drop’: Water, Sustainability and Industry, held last week at the Knutsford Court Hotel in New Kingston. The event focused on approaches to managing Jamaica’s water resources and ways in which stakeholders can contribute to developing the country’s water economy.

Pandohie argued that water-resource management affects the economic and social lives of the country. He said that when one thinks of national security, for example, it must be more than applying the efforts of the police and the army in taking down crime but should also include securing for people water supply, food supply, and education.

He argued that too much ‘lip service’ has been paid to the issue of safeguarding water resources for Jamaicans and called for action on finding a solution.

“Until we understand that, securing our nation’s current status and the future will come to naught. We need to better manage our natural resources. A country like Israel, for example, with only a fraction of our resources, is doing better than us,” Pandohie said, noting that Jamaica has failed to translate its resources into real growth outcomes.

He said the country has been experiencing serious crises as a result of the management of its water resources.

“We are seeing now increasing problems with water, for example, in places like St Mary and Portland, places that traditionally, you wouldn’t associate with drought, having drought now, and it’s not just about the rain. The link is obvious, but we are not managing our resources properly,” he said.

Also addressing the forum, Minister without Portfolio in the Ministry of Economic Growth and Job Creation Pearnel Charles Jr said that the Government will make water the core of the country’s approach to sustainable development.

He said that it was crucial that Red Stripe had brought together the various stakeholders to participate in the forum, which placed the spotlight on Jamaica’s most critical resource.

“We have to ensure that we are aligned with the international thrust towards conservation and the part that that plays as the core of the sustainable development drive,” said Charles Jr.

The goal has eight targets to be achieved by 2030. Progress towards the targets will be measured by eleven indicators.

World Water Day was celebrated on March 22, and was an international day to celebrate freshwater. Its observance was recommended at the 1992 UN Conference on Environment and Development in Rio de Janeiro, Brazil.

Red Stripe’s managing director, Ricardo Nuncio, said the attendance of all major stakeholders at the forum was an indication that water remains a critical issue for Jamaica.

He said that by 2030, there are clear facts that suggest that water will become a scarce commodity based on population growth and the use and misuse of water.