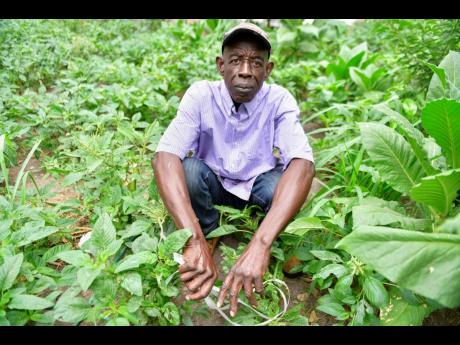 Gladstone Taylor
Carl Smith, also known as John Wayne, tends to his callaloo at his home in Kingston.

As the Easter season culminates, everyone is talking about prosperity, but without the cross, there can be no true prosperity. Many countries are neglecting the cross, and so, instead, they all receive ‘crosses’.

There are four main Fs that we need to look at, that once we employ them to our lives, we will begin to achieve true prosperity.

Family, which must be the first line of any government. If the family is the first line of government, why is there little interest shown to support the family structure? The family is broken and each day, we have seen more laws being put in place to weaken the family than to support and strengthen it. If they were less focused on Climate Change and gender issues, and instead invest more in proper parenting, mentorship, and in putting affordable healthcare in place for poor families; allowing true empowerment of women; abstinence, instead of abortion as a solution; building low-income housing, and putting in place free education, then we would be in better stead economically and in all other areas. The government cannot be afraid to embrace and work with the Church and NGO’s in partnership in order to reduce common law relationships and build the family the right way. They all need to work together and to teach community members skills.

Farming (including livestock) – the first and oldest profession. Agriculture is the single largest employer in the world, providing livelihoods for 40 per cent of today’s global population. It is the largest source of income and jobs for poor rural households. Any nation that wants to walk in prosperity, must prioritise this area. God made everything for man’s sustenance from the ground. There are so many categories of “fake food” now on the market, that many countries either neglect having an agricultural plan or use that as their agricultural plan. Either way, man loses out.

In the Bible, Israel’s principal occupation was agriculture, and even where the crops began to fail, the Lord used the situation to speak to the nation. People would practise giving the 10 per cent of their yield and the First-fruit Offering, and they would focus also on the three major feasts and capitalise on it for economic empowerment. For example, March to April would be the Resurrection season where things would begin to spring again. Then there would be Pentecost between May to June, which is a harvest time. After that would be Tishrei, which is in September to October, at the end of one agricultural season and the beginning of another. There would be the latter and the former rain and it was also a time where the people would practice the law of gleaning, which is God’s “welfare programme” for the poor. So, without welfare programmes for the poor, there cannot be true prosperity.

What we need to do is teach the people farming and the importance of using greenhouses. Greenhouses are capital-intensive and require high to low technology, depending on one’s situation. It is highly productive. In order to achieve success, a farmer must have knowledge and a clear understanding of the following critical factors: marketing distribution, vegetable type and variety; location, greenhouse design and environmental control. Every economist today proposes marijuana (ganja) as the solution to the economic problems of their nation. Therefore, when famine occurs, will we all be eating ganja for breakfast, lunch and dinner? Will we be feeding babies with ganja tea? And if every other nation engages in the planting of ganja, then of what value will that be when a man is hungry.

Faith – who are you trusting and/or serving? Different people serve different gods for prosperity. But ask the question: ‘Will whatever or whoever you put your faith and trust in stand or even survive this millennium?’ Choices determine economic prosperity. What you build on, can it stand up to the wind?

Food – our basic necessity. The food we eat spiritually and physically is critical. Therefore, whoever and whatever you listen to can determine your prosperity. Bad food leads to poor health. Similarly, spiritually consuming junk will eventually lead to death. Spiritually and naturally we need more organic foods and not fake foods.