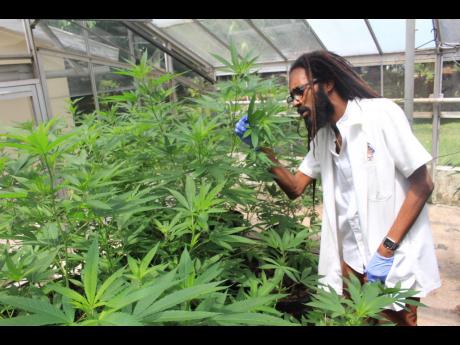 Jamaica built its global cannabis reputation in the 1970s both as a producer and illegal supplier of potent sun-grown ganja. Around the same time reggae and Rastafari were expanding beyond the island’s shores, cannabis was a key ally for both.

During that period, mostly cannabis that originated in the island (known as landrace) was cultivated. It was characterised by its strong, musty aroma and its energising cerebral effect. Chemically, it had a near 2:1 ratio, with THC between eight to 11 per cent and CBD around five to six per cent. The trees could grow to 10ft tall, had thin, spiny leaves and airy buds, and could take up to six months to mature.

The introduction of foreign seeds came with practical applications. These indica and hybrid varieties grew smaller, making them less conspicuous to law enforcement, and had a shorter flowering time, which meant a quicker turnover from plants to profits.

These varieties also produced higher THC but had their disadvantages. They were more susceptible to pests and mould, and a recent study by the University of the West Indies (UWI) has confirmed that they are less efficient than landrace strains.

“If you expose the different cannabis cultivars to the same conditions over the same duration, the landrace will always excel,” said Dr Machel Emanuel of the UWI’s Life Sciences Department, who led the study. “There is a physiological adaptation in the landrace that is allowing it to produce more biomass than the hybrid and indica.”

Landraces thrive because they have genetically adapted to the region over generations through human and natural selection. The earliest species of cannabis originated in the mountainous Hindu Kush region of Pakistan. Because of its high level of adaptability, cannabis can thrive in different habitats and there seems to be an endless number of known morphological and physiological variations.

In the study, Emanuel and his team of Dr Dwight Robinson and research student Valrick Henry aimed “to empirically determine which of the cannabis subspecies vegetates most efficiently within the tropical regions of the world, in particular Jamaica”.

The study involved a landrace sativa strain, an indica strain, and a hybrid, all grown under the same conditions. While the landrace had the smallest leaf area index of the three plants, which means there was less plant surface to absorb sunlight to promote growth, it excelled above the others. It was taller and produced more leaflets and branches than the indica and hybrid varieties.

The study concluded that “cultivating sativa-type cultivars in the tropics requires less energy input to achieve greater biomass output during the vegetative cycle, giving rise to the possibility of achieving greater yields with less inputs for the tropical ganja farmer ... .”

Emanuel says he has always argued for the industry to focus on cultivating plants genetically predisposed for the tropics, as it makes good business sense. Not only are they more efficient but the plant will express unique chemical compositions that could have specific medicinal applications. Given Jamaica’s established international reputation, if the industry focused on developing and marketing its landraces, it could see signficant value added to its brand equity.

“The phytochemical profile of cannabinoids and terpenoids that are expressed within these landrace cultivars are unique to Jamaica and its micro climate,” the study noted. “Therefore, by quantifying, classifying, stabilising and replicating the characteristics of these landrace cultivars, therapeutic and medical connotations could be added to the nostalgic value of marketing and branding Jamaica’s cannabis products.”

This effect is seen in coveted landraces such as Malawi Gold, Colombian Gold and Durban Poison, some of the rarest and most expensive cannabis varieties, and all easily identifiable by their geographic origin. Cannabis plants originating from central and south Africa have also been noticed to produce high levels of THCV, a cannabinoid that has been successful in improving insulin sensitivity in patients with type 2 diabetes and has shown anticonvulsant properties.

Lambsbread is the most reputed Jamaican landrace, thanks primarily to its immortalisation in reggae music and it being a preferred choice by reggae icon Bob Marley. The other two known landraces are Thyme and Goshen.

There are legitimate concerns, however, if Jamaican landraces actually still do exist. With the keen foreign interest in Jamaican ganja and the country being a heavily trafficked port, hybridisation has been rampant over the past three decades. Prior to the influx of foreign seeds in the 1990s, local farmers also had to contend with aggressive confiscation and destruction of their plants and seeds by law enforcement.

Emanuel says the best bet to finding Jamaican landraces rests with indigenous farmers such as the Maroons and Rastafarians.

The landrace used in the study was sourced from a farmer in a remote region of Dominica in the Eastern Caribbean. To find it required a six-hour hike through hilly terrain to get to the location. The farmer has been isolated from civilisation for 40 years.

Tropical landraces are considered crown jewels in the cannabis industry because of their rarity and heritage. Their aroma and cerebral effect are said to be like nothing experienced with today’s hybridised cannabis, and their potential medicinal benefits remain mostly untapped.

“There is a nostalgic value to our local cultivars and there would be a market niche if we could really produce those types of cultivars in large proportions,” Emanuel reasoned. “It is worth investing in and capitalising on it.”