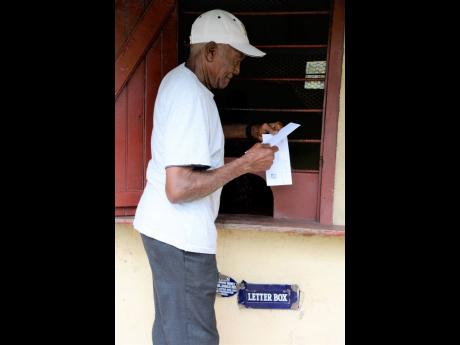 Ian Allen/Staff Photographer
Gladstone Terrill collecting his mail last Wednesday at the Devon Pen Postal Agency in St Mary, one of the few postal agencies which remain open in the parish. 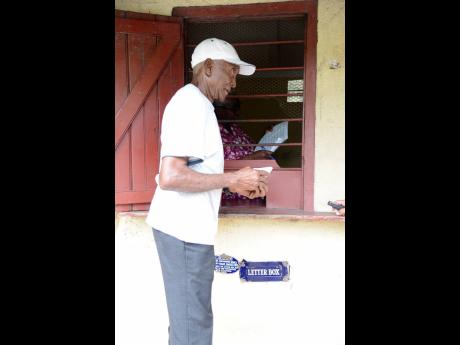 Information and communications technologies (ICT) have largely dealt a death blow to a number of post offices across the island as the local postal service struggles to remain feasible. However, in Devon Pen, along the Junction main road in St Mary, the postal agency continues to be the mainstay of community life.

Postmistress Velma Shaw, who is on duty Monday, Wednesday and Friday each week, explained that while the facility at Scotts Hall has been closed, neighbouring communities of Brandon Hill and Broadgate continue to enjoy the services of their own postal agencies.

The Gleaner team was just in time last Wednesday afternoon to catch up with Gladstone Terrill as he collected two pieces of mail – utility bills. However, he explained that the socialisation bonus his postal ventures bring whenever he meets relatives along the way is something he relishes.

“When me come out and happen to buck them up, we make much of each other,” he said.

Shaw, who has been the postmistress for “long time, over 20 years”, knows all clients by name and face, but, she says, “sometimes ‘strange face’ come and ask for letters”.

Shaw lives “not so far” away and her busiest days are when cheques for the Programme of Advancement Through Health and Education are due as nowadays, people aren’t using traditional mail services that much. Still, sometimes residents turn up to post as many a five letters per day.

As more Jamaicans gained access to electronic mail platforms and private mail delivery services, the country’s overall mail volume declined by 26 per cent between 2012-13 and 2016-17. This was part of the findings of an audit done by the Auditor General’s Department, which last year advised that the Postal Corporation of Jamaica, established in 2000 to lead the modernisation and commercialisation of the public postal service, had failed to make any meaningful breakthrough in carrying out its mandate 18 years later.

Auditor General Pamela Monroe Ellis also drew attention to the snail’s pace at which the technology ministry was moving in finalising the Postal Service Bill for Parliament’s consideration and approval. The bill is also intended to create a new statutory corporation, Jamaica Post, and the regulation of the postal service in Jamaica.

“The new Postal Service Act will seek to establish an independent regulator. However, MSET (Ministry of Science, Energy and Technology) has not completed the Postal Service Bill since July 16, 2007, despite setting several targeted completion dates.”

At that time, it was determined that the postal service sector was unregulated, with more than 24 commercial entities and contractors offering mail-delivery services, and some postal access points continue to operate uneconomically due to little or no mail activity.