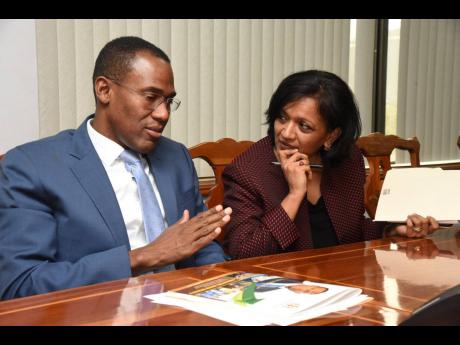 The board notes that consequent on “commendable” performances under two ­successive Fund arrangements since May 2013, “Jamaica’s public debt is projected to fall below 100 per cent of gross domestic product (GDP) for the first time since fiscal year 2000-01, to 98.7 per cent of GDP in fiscal year 2018-19”.

This is outlined in an April 22 statement posted on the IMF’s website, following the Board’s completion and approval of Jamaica’s fifth review under the 36-month US$1.66-billion Precautionary Standby Arrangement.

It now enables the release of approximately US$223 million, which will bring the total sum available to Jamaica to US$1.4 billion, if necessary.

“All quantitative performance criteria at [the] end [of] December 2018 were met, and the structural benchmark to table, in Parliament, amendments to the Bank of Jamaica (BOJ) Act, was completed in October 2018,” the statement further indicated.

The board, however, noted that the 2.4 per cent inflation rate out-turn recorded in October 2018, which triggered a staff consultation under the Monetary Policy Consultation Clause, remained unchanged in February 2019.

“Further monetary easing is needed to restore inflation to the midpoint of the four to six per cent target range. The BOJ’s reduction in the reserve requirement on Jamaican dollar deposits will help make policy accommodative, but further rate cuts are likely to be needed,” the document further indicated.

The board also suggested that the BOJ continue reducing its foreign exchange footprint, including limiting sales to “disorderly” market conditions, adding that “the need for further reductions in reserve requirements should also be assessed”.

The IMF has emphasised the need for action by the public and private sectors to achieve higher levels of sustainable growth.

The Fund says that for its part, the Government’s 2019-20 Budget “is reducing the primary surplus by 0.5 per cent of GDP to 6.5 per cent, without compromising the medium-term public debt anchor”.

As for the private sector, the board proposes that members “capitalise on these fiscal measures to increase investments, and create opportunities for advancing financial inclusion”.

The board underscores that ­public-sector short­comings “should be immediately addressed”.

This, the IMF noted, could be achieved, in part, by empowering the Integrity Commission; ­passing regulations to solidify a transparent and competency-based process for appointments to the boards of public bodies; transferring funds from government commercial bank accounts to the Treasury Single Account (TSA) and closing the former; and reducing the number of public bodies.

Strengthened coordination between the Financial Services Commission and the BOJ, and increasing both institutions’ capacities have also been identified as paramount to maintaining ­financial-sector stability.