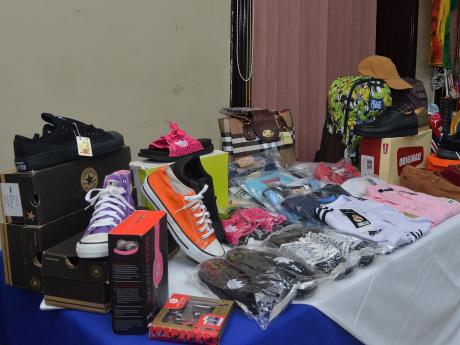 A sample of counterfeit goods seized by the police, which were on display today - Kenyon Hemans photo

The police Counter Terrorism and Organised Crime Division (C-TOC) today destroyed just over $2.6 billion worth of counterfeit goods that were seized between 2012 and last year.

At the same time, the Jamaica Customs Agency (JCA) has signalled that it is taking steps to dispose of nearly $6 billion worth of counterfeit goods that have accumulated at its warehouses in recent years.

Dave Hanson, manager for the JCA’s Eastern Region Contraband Enforcement Team, said this includes $376.7 million worth of fake name brand items such as handbags, footwear, cigarettes and cigars that were seized last year.

The other items were seized in previous years and are now stacked in over a dozen containers at JCA facilities.

Assistant Superintendent Victor Barrett said the $2.6 billion worth of counterfeit goods destroyed today were part of criminal cases that have been completed.

Barrett also criticised the judiciary and lawmakers, arguing that the penalties meted out to persons found with counterfeit goods amount to a slap on the wrist.

Pointing to the billions of dollars in counterfeit goods seized by the police and the JCA since 2012, Barrett said the fine for the period was $17 million.

"Something is wrong. But none of us have the capability or the authority to get into the minds of the judiciary because they are acting within their framework and the framework of the law," he said.

"I am going to be bold: The policymakers need to understand the dangers and the issues associated with the fuelling of funds into organised crime and that is why we need stiffer penalties and stronger laws so we can better protect our citizens and rid the streets of these criminals,” he said.