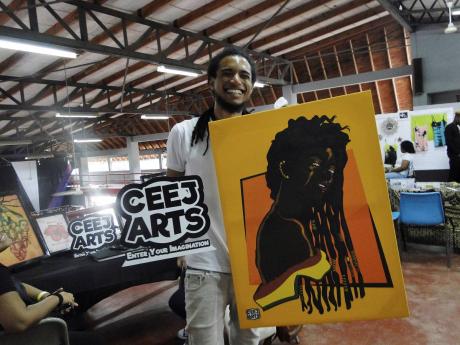 Paul Williams
Ceeja Carpio says he wants people to feel good when they see his art. 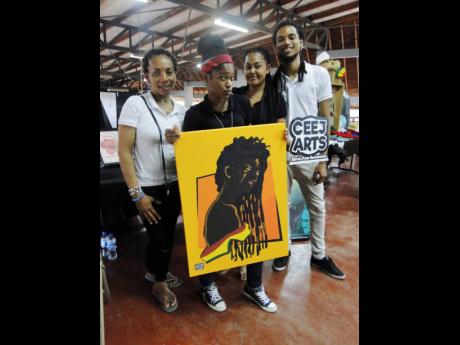 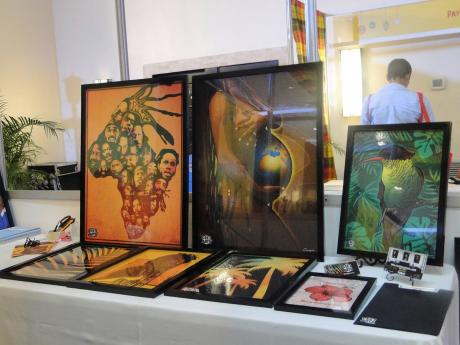 Contributed
Some of Ceej Carpio’s pieces of digital art. 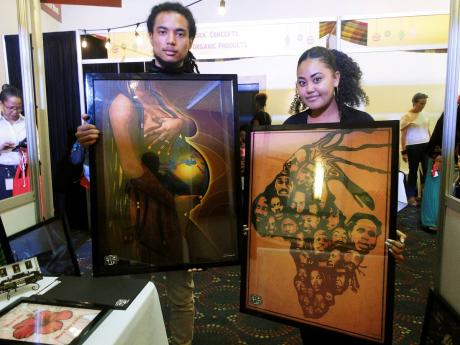 Paul Williams
Ceej Carpio and his marketer, Deandra Young Sam, displaying some of his black-themed pieces.
1
2
3
4

CeeJ Carpio went through the public-school system hoping to acquire a tertiary education, and he actually enrolled in one of our local universities. Yet, the young man originally from Waterford, St Catherine, met upon financial challenges, which caused him undue stress.

Carpio eventually withdrew from school. But withdrawal did not mean staying home moping and riding the rhythm of the ‘Nutt’n nah gwaan’ song. A business of his own came to mind, his artistic mind, and he decided to give his art a chance. For he remembered the words of his late father, who was self-employed, not to work for anybody. It was also about going back to school, “YouTube University”, where he said he learned all he needed to know about illustrating.

He, who was studying computer graphics at university, has always been involved with art, even passing it at CXC’s CSEC and CAPE. Now, at age 22, Carpio is a digital art illustrator/freelance graphic designer, working in his own business under the registered name of CEEJ ARTS.

CeeJ is his birth name. It came from his mother’s imagination, and the tag line for his business is ‘Enter your imagination’. And, for the past two years, Carpio has been using his imagination and skills to eke out a living. But business, just like studying, requires financing. And Carpio, who is self-financed, has been to the business hell and back.

“The process was super-stressful,” he revealed to The Gleaner late last year, while he was selling his pieces at A Jamaican-Made Christmas inside The Jamaica Pegasus hotel.

Recently, The Gleaner caught up with him again, at Craft Craft, Jamaica’s Pop-Up Craft Village inside the Lindo Auditorium at Campion College, in St Andrew.

Carpio has not surmounted all the initial challenges, as there can be frustrating moments. And there is the element of balancing work with leisure time, as one can impinge on the other. There is also the notion that there cannot be just one stream of income, so other opportunities have to be seized.

“Now that it is no longer a thing I do for fun, and it is business, now money-related, is serious work, the frustration stems from that,” Carpio explained, but he has no intention of closing shop. But he is travelling at full speed, mindful of the bumps in the road. In fact, he wants to open a physical shop, in addition to his https://ceejarts.com platform. Developing wings and taking flights to establish himself abroad is also a part of the plan to expand.

Being the owner and operator of CEEJ ARTS is a ‘24/7’ lifestyle for Carpio, he said. There is no easing up as there is much to be done. Selling at Pop-up fairs and festivals is one way of marketing his items, and he is ably assisted by his girlfriend, Deandra Young Sang, who is responsible for mainly the marketing side of things.

The items that Carpio sells are digitalised images depicting themes, such as the importance of women, black (African) history and heritage, the beauty of Jamaican flora and fauna, etc. He said his brand is a “tropical” one that seeks to evoke racial and national pride. He wants people to feel good when they see his work.

And the feedback is a positive one, he said. People like his work, the brand and the way it is packaged. It is about offering something different, for he is cognisant of the importance of being a standout.

“Whatever you have to offer is not for everybody,” he said, which is a piece of advice to young people who might want to get into business.

To the ones who are afraid of going into business, he is encouraging them to forget their fears and take the plunge, because “being afraid to fail will cause failure”.

It is best to start out early, make the mistakes and sacrifices early and learn from the mistakes, he advised. Take the chance.