Crawford, Haughton sworn in as Senators 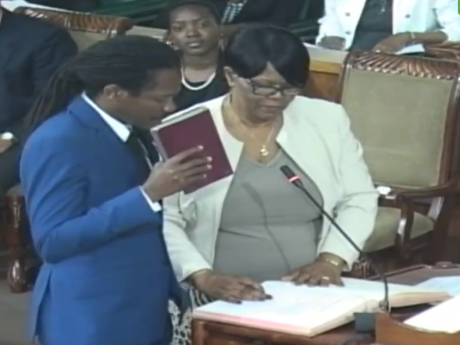 Opposition Senator Damion Crawford takes the Oath of Allegiance as he is sworn in as a legislator.

Opposition Senator Damion Crawford has thanked his peers on the government side for the way they treated him during the recent by-election campaign in Portland Eastern.

Crawford was speaking after being welcomed back to the Senate by both government and Opposition members after losing the April 4 by-election to the Jamaica Labour Party's Ann-Marie Vaz.

First-time Senator Dr Andre Haughton also took his seat in the Upper House to an ovation by legislators on both sides.

Crawford said he was "very appreciative" of how his colleague senators on the government side approached the campaign.

"What was said, how I was greeted, generally, I am appreciative and I feel as if I'm a friend and I'm grateful for that," he said.

"They were active for their party, but they weren't against me," he added.

Crawford had stated publicly that he was not happy with some of the utterances by senior members of the Jamaica Labour Party singling out Daryl Vaz and Floyd Green.

This morning, however, he thanked his Opposition colleagues, joking that "they worked very, very hard to get rid of me from the Senate."