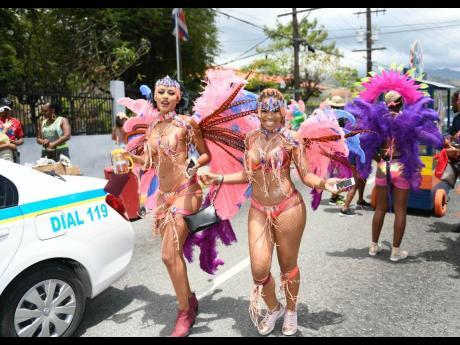 Several roadways in key sections of the Corporate Area will be closed tomorrow to facilitate three carnival road marches.

As a result, the police say motorists should expect delays and detours along roadways in and around New Kingston, Half Way Tree and Liguanea in St. Andrew.

The police say the traffic changes will begin to take effect at 8:00 a.m.

The police Corporate Communications Unit (CCU) says members of the public can visit the Jamaica Constabulary Force website and social media pages to view a map of the intended routes for the road marches.

They are also warning revellers that the no-parking zones will be strictly enforced and that illegal parked vehicles will be towed at the owners’ expense.

CCU says police personnel will be deployed at various points along the routes and appealed to motorists to obey their instructions.

Here is a list of things that will not be allowed during the parades:

No vending stalls or handcart vendors will be allowed along the parade routes.

No music systems will be allowed along the parade routes.

No motor or pedal cyclists, to include quad bikes, will be allowed to participate in the parades.

No distribution of souvenirs and other free items will be allowed to be issued from the trucks.