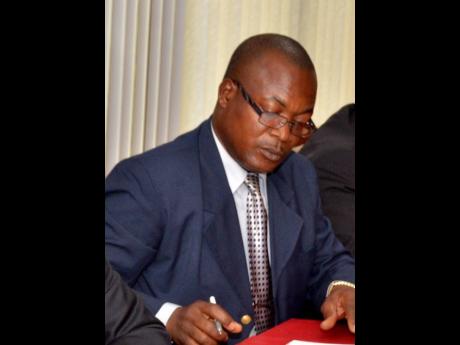 JIS
Arlington Turner, chairman of the Jamaica Federation of Corrections.

Amid concerns that inmates are contracting HIV at an alarming rate, the chairman of the federation that represents rank-and-file correctional officers has denied that Jamaican prisons are victims of a culture of rape, blaming the prevalence of sexually transmitted infections on the gay population incarcerated.

Arlington Turner, chairman of the Jamaica Federation of Corrections, has rubbished claims that sexual intercourse is rife within the precincts of prisons.

“That is not a problem here. When people read into things and say that these things happen inside prisons, it is not true,” Turner told The Sunday Gleaner. “We should understand that if such things are happening within institutions in terms of that kind of cohabitation of inmates, this is never seen by a correctional officer. I can guarantee you that. In most cases, this is confined to specific spaces.”

A Sunday Gleaner exposé unearthed that HIV prevalence in Jamaica’s prisons had spiked, over the seven-year period from 2011-2018, by more than 100 per cent to 6.9 per cent, almost four times the national average. That statistic makes prisoners the third-most at-risk group for HIV, behind only gay men and transgenders.

Director of medical services at the Department of Correctional Services, Dr Donna-Michelle Royer-Powe, also sought to pour cold water on the assertions of the study, suggesting that the increase in HIV rates among inmates might be explained by their contracting the disease prior to incarceration.

‘Not Contracted In Prison’

“I concur with what the director of medical services had said. The window in terms of persons coming in has a lot to do with it. Many of these things are not happening inside the prisons,” Turner said.

But the executive summary of the 2018 study dispute the claims of both Turner and Royer-Powe, as the sample size of 778 inmates, out of a prison population of about 4,000 at four adult correctional facilities, was very large and was “able to be nationally representative”.

Prison authorities have long wrestled with one solution to rising levels of STIs among inmates – the dispensation of condoms – but that prospect has been avoided because of Jamaica’s stigma towards, and cultural condemnation of, men who have sex with men, as well as a more-than-century-old law outlawing buggery.

But the federation chairman argues that the distribution of condoms should be a private matter between gay prisoners and their partners and be addressed in one-on-one interactions with medical doctors.

“Of course, maybe the persons who are gays may really want to get condoms. I am not sure. That discussion has to be private. It can’t be an issue where all prisoners will be issued condom.

“But to just come out and say you are going to give condoms to prisoners, it seems like the entire populace, and that is wrong. I can tell you that the individuals in the regular populace, you would never get one of them to accept a condom,” he added.

According to Turner, presumably gay inmates are confined to restricted sections of maximum-security prisons. At the St Catherine Adult Correctional Centre in Spanish Town, they are placed in Block A. At Tower Street, they are incarcerated in a section called ‘the special building’, Turner told this newspaper. (“They can’t mingle with the regular population. If these issues are happening, that is where it is happening.”)

There are approximately 2,200 correctional officers in Jamaica.

Turner said that the Sunday Gleaner exposé of HIV prevalence in prisons reignited over condom usage among inmates and triggered memories of the 1997 riot at the Tower Street Adult Correctional Centre, during which more than a dozen inmates were killed. Immediately, security measures were ramped up.

“The security had to be turned up recently when that argument surfaced the other day, because persons were peeved that we were going back there again. It was scary.

“I am in the prison, especially Tower Street, very often. When the riot started, I was at Tower Street. You can’t walk off in riots. You have to protect yourself and the safety of others. ... Many times, riots in prison don’t give warnings. It just happens,” said the 26-year veteran of the Department of Correctional Services.