Give social work due respect – Taylor 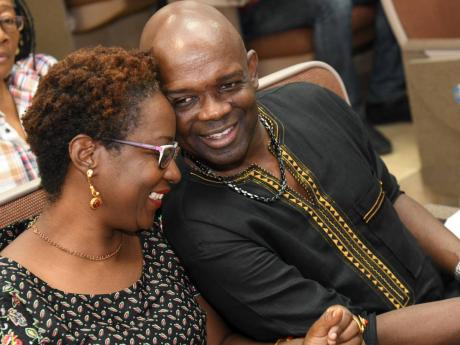 Rudolph Brown
Dr Orville Taylor, head of the Department of Psychology, Sociology and Social Work at the UWI, draws a smile from Sandra Latibeaudiere, head of the Social Work Unit, at a forum on murder-suicide and its impact on Jamaica at the Faculty of Social Sciences on April 26.

Successive administrations have been hauled over the coals for their lack of respect for social workers, and head of the Department of Sociology, Psychology and Social Work at The University of the West Indies, Dr Orville Taylor, believes that Jamaican children are the greatest casualties of misplaced priorities.

Dubbing social work as the “queen of the disciplines” in his department, Taylor emphasised that the field of study is more than a talk shop.

“The problem with social work is that it is so unassuming. Social work is work, work, work, not chat and theory, when you do the things that people expect you to do we don’t protect our borders,” he said.

“So people who think they are bright and some are quite knowledgeable in their fields … they feel they can make judgements and social interventions,” he continued. “Many of them are well-thinking, but if you don’t have the body of knowledge, the body of theory and research, you are not going to be doing yourself or worse the society any good.”

Taylor was speaking at a seminar put on by students of The University of the West Indies to look at rising concern at murder-suicide and its impact on the Jamaican society.

Earlier this month, the Child Protection and Family Services Agency (CPFSA) was blasted by O’Neil Grant, president of the Jamaica Civil Service Association (JCSA), for granting short-term contracts to social workers, which were deemed inequitable and threatened job security.

The CPFSA was formed from a merger of the Child Development Agency and the Office of the Children’s Registry two years ago.

In an interview with The Sunday Gleaner, Grant said: “When a social worker starts to work with an individual, after three months, they are told that you need to go home, because we don’t have any work for you, or you break the person’s contract so that they don’t build up any employment rights,” Grant said.

“This, in itself, might cause the child or the person affected by what is happening to shut up and say, ‘Bwoy, I keep on seeing all of these new people. Why am I to speak to you now’?” he said, as the CPFSA noted that temporary social workers are hired to help out with cases, and that it does not have the money to employ permanent staff.

Last Friday, however, Taylor redirected the blame from the CPFSA to the Government.

“The money really isn’t there, because we have not listened enough to the social workers, and we have fundamentally misconceived the things that lead to the very problems we are talking about. Nobody is born a serial killer,” he said, noting that the Government has for years failed to pump resources into social work in Jamaica.

“You need to spend money to administer the affairs of little children at the beginning. We need to have a robust Family Court that has the same stature like a Supreme Court, with the same quality of judges and resources,” he argued. “You must have a Family Court where the research and opinions of social workers can’t simply be disregarded by somebody who has no training in social work and thinks that the knowledge that he or she has comes from law school,” he said.