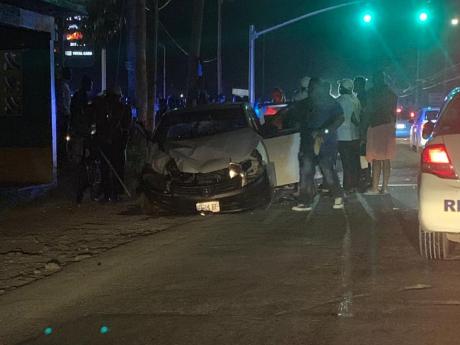 Contributed
The crashed getaway car in which the three rogue cops were travelling after attacking a party in Spanish Town, St Catherine this morning.

A high-level probe has been launched by senior investigators attached to the Jamaica Constabulary Force's Criminal Investigation Bureau (CIB) and the Inspectorate of Constabulary into reports that three suspended policemen were behind this morning's gun attack on a party in Spanish Town, St Catherine.

Three persons, including one of the alleged rogue cops, were killed in the incident.

An off-duty policeman is being hailed for his bravery after he reportedly chased and collared two of three suspended policemen suspected of killing a man at the party and attempting to flee the scene in Chedwin Park, St Catherine shortly after midnight.

The Independent Commission of Investigations (INDECOM) is also carrying out its own probe of the dramatic incident.

The off-duty policeman, whose identity is being withheld, allegedly saw his three suspended colleagues who are attached to the Mobile Reserve Unit kill Sheldon “Junior Biggs” Daley and subsequently pursued the grey Nissan AD wagon in which they used to escape the scene.

It subsequently crashed into another vehicle at the intersection of Brunswick Avenue and Jobs Lane, just outside of Spanish Town.

The episode resulted in one of the suspected rogue cops being killed, while another was taken into police custody after a shootout had ensued.

An unidentified male, who was an occupant in the crashed vehicle, was also shot and killed during the exchange of gun fire.

Three Glock pistols, a .45 pistol and a Browning 9 mm pistol were seized from the Nissan vehicle, the police Corporate Communication Unit confirmed.

INDECOM identified the policeman who escaped as Corporal Kirk Frazer.

“The two officers had been previously charged for murder by INDECOM and were released on bail,” the police watchdog body said.