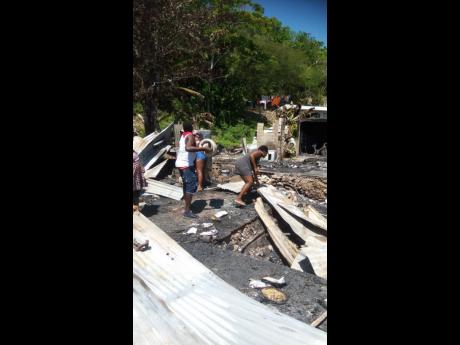 Hopeton Bucknor
Family members rummage through what’s left of their possessions after three homes were destroyed in an arson attack. 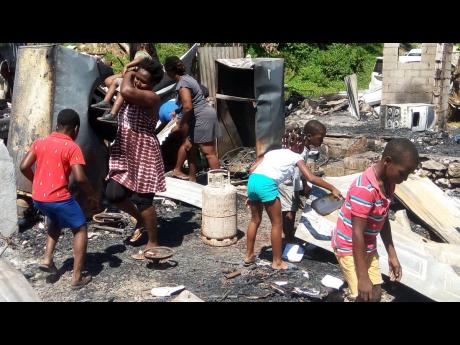 Hopeton Bucknor
Family members rummage through what’s left of their possessions after three homes were destroyed in an arson attack.
1
2

“Frightening” and “terrified” are two of the words Veronica Burk-Blair, housewife of Hill Top, in Canaan district, St James, used to describe the ordeal she and her family survived as gunmen destroyed their family house on Friday morning.

Fifteen people, including seven children, have been left homeless in the wake of the predawn arson attack.

When The Sunday Gleaner visited the location yesterday, distraught family members could be seen rummaging through the burnt rubble. A Toyota Hiace minibus was seen burnt at the entrance to the three homes – a mixture of board and concrete structures. The family also showed the news team a coop in which dozens of scorched chickens and pigeons lay dead.

The Adelphi police reported that shortly after 3:30 a.m., gunmen posing as police went to the yard and fire-bombed three family houses.

According to the police, the gunmen opened fire on the occupants of the houses, which resulted in a 12-year-old primary-school student being shot and injured.

The gunmen also shot up a Voxy bus that was also parked inside the premises.

“Mi hear a loud knocking pon the house, so mi get up and a listen. Mi think it was a puss who always deh pon the housetop a give trouble, but when when mi listen, mi hear the loud knocking again,” said the 58-year-old Burk-Blair, who is affectionately called ‘Melon’.

“Mi walk out a the room and mi come face to face wid a man wid a gun ... . That was when mi si seh the entire house deh pon fire. Mi shout out and the gunman jump over the fire and jump out o’ door,” said Burk-Blair, who had to jump through a window to make her escape.

The resident said the family tried to flee from the burning house but came under attack from the gunmen, who rained bullets upon the homes.

“Wi don’t stop try until mi daughter and her son reach out a door, but mi get trap inna the house and a break mi haffi break a window fi jump outside, and even cut up miself.

“By this time, the gunman them fire whole heap a gunshot inna the yard, and set the two other house and a brand new bus pon fire.”

An alarm was raised and the police and fire department were summoned. Upon arrival, the firemen could only manage to carry out cooling-down operations, as the fire had already destroyed three houses.