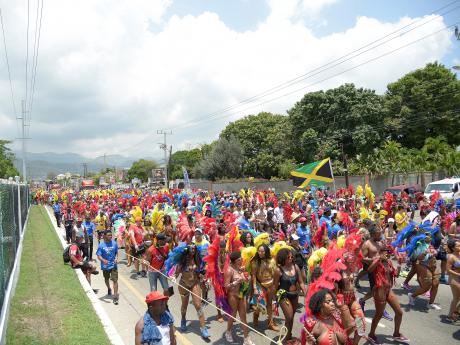 The Jamaica Environment Trust (JET) says it's disappointed with the efforts of carnival organisers and state agencies in having the streets of Kingston cleaned following yesterday's road march by revellers.

"Despite efforts by JET through the Nuh Dutty Up Jamaica campaign to remind revellers to “Nuh Dutty Up Di Road” on carnival day, the sheer magnitude of the event, over ten thousand revellers and thousands more spectators, would have required that significant capacity be invested in solid waste manage systems to ensure adequate cleanup after the event," the environmental lobby complained in a Letter to the Editor today.

"It appears that these systems were either poorly designed to begin with or broke down during this year’s carnival activity," JET added.

Further to the piles of garbage left by yesterday's activities, JET said it has received complaints about littering from other carnival events.

"There have also been numerous reports received by JET over the carnival season of event venues being left littered with trash, and carnival day appears to have been a culmination of this poor solid waste management," the organisation said.

JET said it's the responsibility of government to enforce the anti-litter laws and to ensure that promoters adhere to the provisions of their permits.

However, the environmental lobby said promoters and supporters have a role to play as well in ensuring that the streets are clean.

"Kingston should not be waking up to the mess left by carnival in the future," it said.