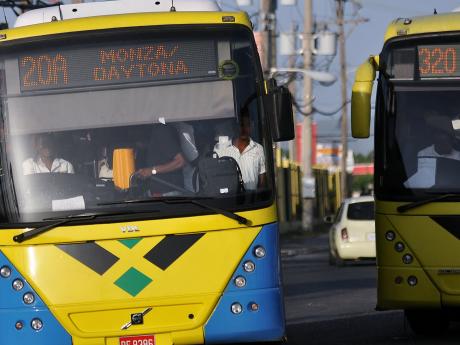 A Jamaica Urban Transit Company (JUTC) bus driver is nursing knife wounds after he was violently attacked by a passenger this morning in Half Way Tree, St Andrew.

The JUTC says preliminary reports indicate that sometime after 9 o’ clock a passenger boarded a bus inside the Half Way Tree Transport Centre and soon thereafter began complaining that the bus was too cold.

He reportedly proceeded to open a window when he was told by the driver that it would affect the air conditioning and that the window must be kept closed.

The passenger reportedly demanded back his fare and soon thereafter approached the driver who was preparing to return the money when he was slashed in the face.

The attacker ran off the bus, but was pursued by the driver who eventually held him along Eastwood Park Road where the police intervened and accosted him.

JUTC Managing Director, Paul Abrahams, along with other senior managers visited the hospital where the driver is being treated.

“The JUTC condemns the wanton attacks on drivers who are providing an essential service to law-abiding Jamaicans,” Abrahams said.

He appealed to fellow drivers for calm, who suspended their service for an hour in a show of solidarity as they vented their disapproval over the incident.

The drivers have since resumed their duties.

Meanwhile, Cecil Thoms, the JUTC’s Corporate Communications Manager, says the latest attack comes on the heels of a similar incident earlier this month in which another driver was stabbed multiple times in the Half Way Tree area.

“These incidents are very concerning and we hope that this does not become a trend. We are appealing to passengers to not tamper with any part of the bus and to generally abide by the company’s rules, and wish our driver a speedy recovery.”