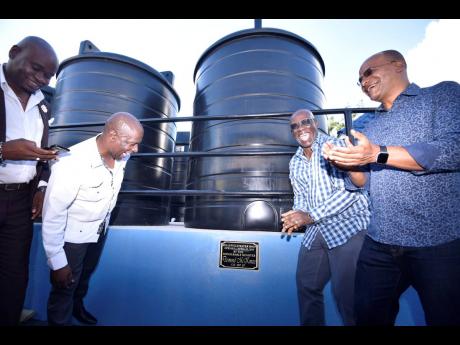 Contributed
Minister of Local Government and Community Development Desmond McKenzie (second right) is very delighted to open a water shop in Bellefield, central Manchester, on April 25. Also sharing in the moment are (from second left) Mayor of Mandeville Donovan Mitchell and member of parliament for the area, Peter Bunting. 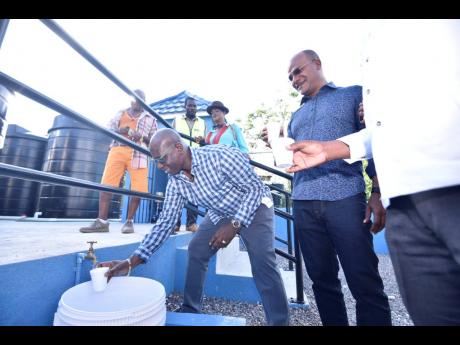 Contributed
Minister of Local Government and Community Development Desmond McKenzie fills a cup at the new water shop which he officially opened at Bellefield in central Manchester last Thursday. Observing at right is member of parliament for the area, Peter Bunting.
1
2

Residents of Bellefield, Banana Ground, Blue Mountain, Bombay, Virginia, Top Bellefield, Davyton and Coffee Grove in central Manchester now have a reliable source of potable water, as a water shop has been opened in the area.

It was built at a cost of $9.5 million and was officially opened last Thursday by Minister of Local Government and Community Development Desmond McKenzie. Also present were Mayor of Mandeville Donovan Mitchell and Member of Parliament Peter Bunting.

“For the next year, the water will be provided free of cost. We will review it then to see how it works; but no resident should be turned away, because there is no fee associated with the water at this time. We will be ensuring that the tanks should never run dry,” McKenzie said.

The minister added that more water shops would be built, as there is a need for them where there is no available water supply across the island.

More than 20,000 gallons of purified water will now be ­available daily, the minister noted, and urged the citizens to protect the facility.

McKenzie thanked Dillon Dawkins, who leased the land on which the facility was constructed. “This is what community involvement is all about,” he said.

Dawkins said he donated the land to house the water shop because of the love he has for the community and the people. The lease is initially for 10 years, with an option to renew.

“There were times when I was asked by people to take water to them, and I used my vehicle to do it,” he said.

A resident of Bellefield, Claudine Lloyd, said she is happy for the water shop. “It is better, cleaner and in a good environment. So far, we are enjoying it and we will see how good it works,” she said.