'Put up or shut up' Vaz tells former Contractor General 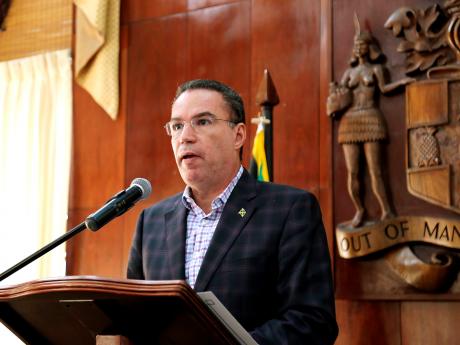 Daryl Vaz, Minister without portfolio in the Economic Growth and Job Creation Ministry, has rejected claims by the former Contractor General Dirk Harrison that he influenced the sale of a St Ann hotel and beach lands below market value by the state-owned Urban Development Corporation (UDC).

The Office of the Contractor General has since been subsumed into the Integrity Commission.

Vaz, in a statement this afternoon, labelled the allegations as false, disingenuous and without evidence.

Harrison' report, which was tabled in House of Representatives today, stated that the UDC was unable to negotiate freely and from a position of strength in the sale of Rooms on the Beach to Puerto Caribe Properties Limited because of Vaz’s direct involvement and that of other state agencies.

But, Vaz hit back saying that the report was unable to provide any substantive basis for the claim that the UDC was not able to negotiate freely.

He says the OCG’s “curious” decision to equate a reported offer by him to assist in the divestment process if significant issues arose is a loose, unfortunate and baseless conclusion.

“It is noteworthy that despite unsubstantiated and baseless assertions contained in the report, the former Contractor General was unable to recommend any punitive measures and was not constrained to make any referrals to any other investigative agency,” Vaz said.

“The former Contractor General should ‘put up or shut up’,” Vaz charged.

Minister without portfolio with responsibility for Economic Growth and Job Creation, Daryl Vaz, is strongly rejecting as false, disingenuous and without evidence a claim by former Contractor General, Dirk Harrison, in a report tabled in the House of Representatives today that in relation to the sale of  Rooms on the Beach to Puerto Caribe Properties Limited, the Urban Development Corporation (UDC), was "unable to negotiate freely and from a position of strength because of the direct involvement of Minister Vaz and other state agencies".

Minister Vaz notes that the report compiled by the then Contractor General was unable to provide any substantive basis for the claim that the UDC was not able to negotiate freely. Mr. Vaz says Harrison's curious decision to equate a reported offer by the Minister to assist if significant issues arose in the push to conclude the major potential investment with the UDC being unable to negotiate freely is a loose, unfortunate and baseless conclusion. Minister Vaz says it is noteworthy that despite unsubstantiated and baseless assertions contained in the report, the former Contractor General was unable to recommend any punitive measures and was not constrained to make any referrals to any other investigative agency. Minister Vaz says the former Contractor General should ‘put up or shut up’.

Minister Vaz says as Minister with responsibility for Investment he unequivocally supports the decision of the Board of the UDC, the Ministry of Economic Growth and Job Creation and the Cabinet in approving the terms and conditions of the sale. The Minister reiterates that he acted honourably and further to his mandate to intensify the Government's growth push while both expediting and facilitating the influx of this and all significant investments.

Minister Vaz wishes to place on record appreciation to the Integrity Commission which in the spirit of transparency and fairness took the unprecedented step of allowing the Government of Jamaica the opportunity to respond to what Minister Vaz notes are the baseless findings contained in the former Contractor General’s report.

The Minister says despite concerns from the former Contractor General about the alleged discount given to Puerto Caribe Properties Limited compared to the valuation price for Rooms on the Beach, he stands by the view that the deal was in the interest of the people of Jamaica and the Government of Jamaica would quickly recover revenue gains on the investment. Revenue gain arising from the investment was projected to amount to approximately 30-millions US dollars in tax revenues over a three year period.

Minister Vaz says the potential revenues and other gains projected for the Government over a reasonably short period of time far exceed and are in no way comparable to the incentive the UDC provided to the investor to conclude the crucial investment which was earmarked to create thousands of jobs while securing the long talked about upgrade and redevelopment of sections of Ocho Rios.

According to Minister Vaz, he was advised that in agreeing to the sale price, the UDC took into consideration:

1. That the project involved the construction of a five-star hotel along one of Jamaica's key tourism belts and is consistent with the Government's pro-local and Foreign Direct Investment (FDI) and economic growth push.

3. That during phase two where it was agreed that US 270 million would be invested, that phase was projected to create an additional 1,500 jobs during the construction phase and 3,000 indirect jobs.

4. That the investors had agreed to pump millions of US dollars into the redevelopment of Ocho Rios which would make the area more conducive to other investments while creating other local business opportunities.

5. That the Government of Jamaica was projected to receive over US 9-million dollars in revenues during the first year of the concluded investment, US 10-million during the second year and approximately US 11-million in revenues during the third year. The potential revenue gain in taxes far exceeds the negotiated sale price and is way in excess of any alleged differential.

6. That as part of the deal, the investor had committed to pumping US 1-million dollars into the beach nourishment of a significant section of the Government-owned beach where the public would have full access to. That nourishment of the beach is already underway.

7. Minister Vaz says it’s important to note that the Government of Jamaica took steps to protect the interest of Jamaican taxpayers. He says it must be noted that the negotiated sale price is tied to the development of the property and adjoining land. Additionally, the development was stipulated to take place within an approximately 3-year timeline.  It must be noted that provisions in the agreement forbade the investors from attempting to dispose of the property or benefit from the differential in valuation and sale price.

Minister Vaz says it is based on the above information supplied to him by the UDC, that he strongly rejects as false and disingenuous suggestions by the former Contractor General that the deal arrived at was a travesty and not in the interest of both the Government and by extension the people of Jamaica.

Minister Vaz further stated "this crucial investment has strategic importance to the people of St. Ann and the crucial tourism sector in that section of the island. It is trite business knowledge that a valuation is a consideration but cannot be the only decisive factor in a negotiation regarding a multi-dimensional strategic investment which will bring in hundreds of millions of dollars in foreign exchange, employ thousands of our people and fast track major development which has been talked about for many years but not put into action."

The Minister without portfolio with responsibility for Economic Growth and Job Creation says he currently has reason to be concerned about the future of the crucial investment given the unreasonable and naive conclusions arrived at by the former Contractor General and the vulgar politicking by a representative of the Opposition who used the cover of parliament to make false innuendos.

The Minister says in the interest of fairness and transparency he will be attaching to this media release a full copy of his response to the Integrity Commission in relation to the false, unreasonable and disingenuous conclusions of the former Contractor General.  Minister Vaz's response to the Integrity Commission was also tabled in the House of Representatives today.