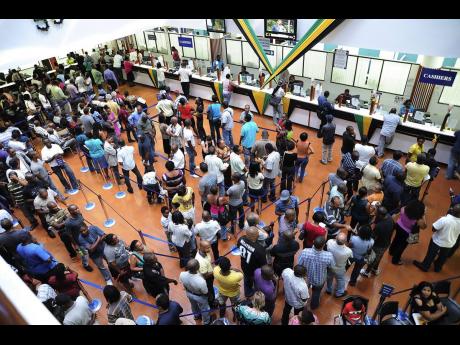 File
Customers queue to conduct business at a local tax office in this 2012 Gleaner photo.

Tax Administration Jamaica (TAJ) customers have expressed disappointment that wait times at the Constant Spring tax office have not improved even after the implementation of an automated customer flow management system that had been touted to make doing business with the state entity easier. Instead, they say things have got much worse.

Karen Robinson, a customer, reported to The Gleaner recently that she has had to wait longer periods than before just to complete a single transaction.

“Previously under the old system, even if the tax office was very crowded, I could be out of there in about one hour. Under the new system, instead of going to one person, I have to go to three. Every time, the system seems to be giving trouble, and to me, it is a total waste of time,” Robinson said.

“I know they are going to say that I can pay my general consumption tax online, but the fact of the matter is that some people don’t want to pay online. Even though we file returns online by requirement, I still go up there physically to give them the cheque and that takes long. The system has a lot of bureaucracy and makes no sense because I have to go through this rigmarole, and let’s face it: you are losing a lot of productivity.”

One man, identified only as Cedric, gave an account of his wife Jillian’s experience at the Constant Spring tax office two weeks ago, claiming that “she spent more than five hours over the course of two days to complete the process” of renewing her driver’s licence.

He lamented that there were no signs informing customers of expected wait times and that there was no evidence of supervisors or managers present to monitor or provide assistance. He added that staff seemed ignorant of the customer charter and that no contact information to which complaints could be directed was available for any of the four senior persons listed in the charter.

Yesterday, the TAJ pushed back against the criticisms, pointing the finger at the National Works Agency, saying works being carried out by the state entity had disrupted communication lines. It also said the new system was in pilot mode and so teething pains should be expected.

“ ... It should be noted that since the commencement of roadworks, the tax office has been impacted by disruptions to communication lines, which has significantly impacted the optimal outcome of the system,” the TAJ said in a statement to The Gleaner yesterday.

“The organisation is addressing service gaps by bolstering service fields with increased personnel. The system is still in pilot phase and system reports and analytics are constantly being analysed and recommendations made to service providers.”

Despite setbacks experienced by customers, officials touted the advantages of the new system.

“Managers on the ground are able to manage customer flow instantaneously to allocate resources where they are needed most,” the TAJ said. “The system provides detailed reports on each officer providing the service. Prior to the implementation of the system, TAJ was not able to effectively and accurately track the wait times of customers. This system allows for granular understanding of processing and wait times.”